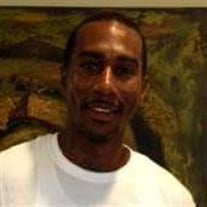 Adrian Marcel Settles also affectionately know as “Deet” to his family and friends was born July 20, 1985 to the union of Angelo and Gail Settles. He was the third sibling of four children. Adrian graduated from Hazelwood Central High School in 2003 and continued his education by completing several certifications in several degrees of study. Adrian's enduring love for life and purpose transcended his love for family and friends. The pursuit of entrepreneurship began at an early age by watching his Grandpa Lawrence Culpepper, Sr. He told his Grandpa just four weeks ago, because of him he wanted to emulate him and own his own business one day and admired the way he took care of his family. This admiration resulted in Adrian becoming an accomplished HVAC Tech. He's hurdled many accolades of which was the beginning of his spiritual journey several years ago which resulted in family worship and attending conventions and talks by Jehovah's Witnesses. Adrian grew into a very determined, loving and kind hearted young man whose generosity has been felt by many. He had so much to live for and so much yet to do. This pursuit was cut short on January 25, 2017 at 10 p.m. at the early age of 31. Adrian is in Jehovah's memory and we look forward to welcoming him back with open arms free from all suffering and pain (Rev 21: 3,4). He was preceded in death by his great grandmother, Frankie Mae Perkins; grandmother, Charlotta “Lottie” Culpepper; great aunts, Marie “Rie” Johnson, Lillian Gray and Frankie; great uncle, Johnny and aunt ~ Jackie Settles. He leaves to cherish his memories: his parents ~ Angelo (Linda) and Gail Settles; several brothers and sisters ~ Willie Lamarco “Big Bro”, Tiffany “Tiff” and Ariel “Tink”, David “The Confidante”, Angelo (Mikki), Antonio (Jennifer), Antwainette and LaDonna (Khurran); grandfather ~ Lawrence Culpepper, Sr.; uncles ~ Altonio (Linda) and Geno Settles; aunt ~ Isoke; three children ~ Ayiana “Yani”, Adrian “D.J.” Jr. and Aleya “Baby Girl”; grandmother ~ Mary Settles; first cousins ~ P.J., Kevin, Trevor, Courtney and Jenny; great uncles and aunts ~ Pat and Eddie “Uncle Edder” Lemons and Walter Gray; and a whole host of cousins, nieces, nephews and friends.

Adrian Marcel Settles also affectionately know as &#8220;Deet&#8221; to his family and friends was born July 20, 1985 to the union of Angelo and Gail Settles. He was the third sibling of four children. Adrian graduated from Hazelwood Central... View Obituary & Service Information

The family of Adrian M. Settles created this Life Tributes page to make it easy to share your memories.

Adrian Marcel Settles also affectionately know as “Deet” to his...

Send flowers to the Settles family.