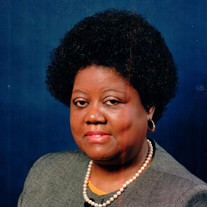 Alice Hykes was born to the union of Melvin and Lillie Mae Hykes on September 26, 1942 in the city of Okolona, Mississippi. Alice was the fifth child of nine children born to this union. Both parents and two siblings, Pearlie Mae Hykes Thompson and Hewell Hykes preceded her in death. Alice received her education in the Okolona Public School System graduating from Fannie Carter High School. After graduation, she attended Okolona Junior College, receiving an Associate’s Degree in Business Administration. Alice relocated to Saint Louis, Missouri in 1967. She enrolled in the Manpower Program specializing as a Key Punch Operator. After receiving her certificate, she was employed with the Mercantile Bank as a Key Punch Operator. Because of her ability to learn and work hard, she was promoted to Assistant Vice President of the Fraud Department until her retirement in December 2000. Alice was united in holy matrimony in 1980 to Lervie Simon. He preceded her in death. To this union was on child, Kimberly. Alice truly loved the Lord and all of His promises. She was saved, sanctified and filled with the Holy Ghost at San Francisco under the late Bishop Dwight H. McDaniels. She was an active Sunday School Teacher and she served as an evangelist under Mother Marie McDaniels and the Wednesday Night Evangelist and Sunday Night Services. She was faithful to the Christian Assembly Conference Morning Glory Praise and Worship. She also evangelized at other churches in the St. Louis area. Alice was a lover of her family. Especially her daughter, Kimberly and her granddaughter, Kayla. When Kayla was sick unto death, Alice prayed and laid hands on her and asked Father God, please don’t take her baby and life came back into the little six year old Kayla. And she always testified of that miracle God granted to her. Alice never lost her love for Father God. She suffered and had many illnesses. She was sick for many years. In spite of her illnesses, she read her bible, her Sunday School lessons and her promise books. She was ill but, yet faithful. Her illness kept her homebound. Father God saw the road getting rough and the hills too hard to climb and He said to Alice, peace be thine, come on home my child. Alice fought a good fight and she kept the faith. She departed this life on Saturday, May 6, 2017 at 1:04 p.m. at St. Joseph Hospital surrounded by family and friends. Alice leaves to cherish her memory: a loving and devoted daughter ~ Kimberly and son-in-law ~ Kevin; one granddaughter ~ Kayla; one future grandson ~ Kevin Hagens, Jr.; three brothers ~ Melvin (Obine), Gene (Sara) of Saint Louis, Missouri and Earvin (Annie) of Okolona, Mississippi; three sisters ~ Della of Okolona, Mississippi, Patricia and Clytee of Saint Louis, Missouri; and a host of nephews, nieces, cousins and friends.

Alice Hykes was born to the union of Melvin and Lillie Mae Hykes on September 26, 1942 in the city of Okolona, Mississippi. Alice was the fifth child of nine children born to this union. Both parents and two siblings, Pearlie Mae Hykes Thompson... View Obituary & Service Information

The family of Alice Hykes Simon created this Life Tributes page to make it easy to share your memories.

Alice Hykes was born to the union of Melvin and Lillie Mae Hykes...

Send flowers to the Simon family.