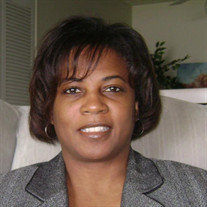 Alicia Foster Sherod, of Florissant, Missouri passed away Saturday, July 15, 2017 at age 52 at Barnes Jewish Hospital. Alicia, who had been battling cancer for three years, was preceded in death by her father Tommy D. Foster (Rock Island, IL), her sister Marion Elaine Foster (Davenport, IA), her brother Keith E. Foster (Dallas, TX), her sister Tonetta D. Pope (Orlando, FL) and her brother Tommy D. Foster II (Dallas, TX). Alicia was born in Davenport, Iowa on June 5, 1965 to Tommy and Bessie Foster as the youngest child of seven. Throughout her years, she excelled in both basketball and track & field before graduating from Davenport Central High 1983. Alicia did not pursue further education immediately, but later went on to major in management and minor in psychology at Columbia College in Columbia, MO. During her pursuit, she continued to work as a Quality Assurance Coordinator for Briggs & Stratton and remained actively involved in her family’s church home of Salem Avenue Baptist Church. In 2005, Alicia earned her Bachelors of Science with Cum Laude honor and in 2015, followed up with the completion of her Master of Arts in Teaching in Secondary Business Education. Upon leaving Briggs & Stratton, Alicia positively influenced the lives of youth, staff and their families while working at Alternative Opportunities (Rolla, MO), Child Center Marygrove (Hazelwood, MO) and Hoyleton Youth and Family (Hoyleton, IL). The children and families she crossed paths with left her humbled and appreciative of all she was blessed with. She later moved on to her calling as an educator, leaving her mark on students of all ages through online courses, as well as high schoolers in MO, IL, and TX. Alicia not only worked hard in her career, but also as a servant of God. Alicia invested tirelessly into teaching Sunday School, leading Bible study groups for the youth, volunteering at Bible Camp and VBS, and organizing a puppeteering group that would teach young children about The Word of God. Alicia found comfort in a new church home, First Christian , while living in the St. Louis area. She did not allow any excuse to hold her back from fulfilling her duties as a mother, daughter, sister, aunt, friend, teacher, coach or most importantly a faithful servant. Alicia leaves behind: her mother ~ Bessie L. Foster (Davenport, IA); her sisters ~ Denise L. Johnson and Jessie M. Foster (Waterloo, IA); her children ~ Latricia F. Sherod (Hazelwood, MO), Marsalis Sherod (Florissant, MO) and Andrea Sherod (St. Louis, MO); three grandchildren ~ Trent, Alaina, and Jason II (Latricia) and former husband Paul Sherod; remaining family members also include: Marie Summage (Davenport, IA), beloved nieces and nephews from CA, TX and MO, and a host of uncles, and cousins from IA, MO, MI and GA.

The family of Alicia Sherod created this Life Tributes page to make it easy to share your memories.

Send flowers to the Sherod family.