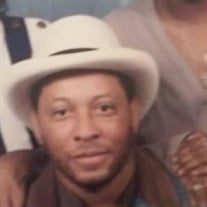 Mr. Alphonso “Ricky” Johnson was born January 26, 1956, in Moscow, Arkansas to George Mitchell and Ella Mae Johnson. The family moved to East St. Louis, Illinois when Ricky was a child. Ricky accepted Christ and was baptized at New Jerusalem Missionary Baptist Church in East St. Louis, Illinois under the direction of T. L. Jones. As a child, Ricky loved basketball and hanging out with his family and friends. He also had a great love for his pet dogs. Ricky attended school in the East St. Louis area; he received nursing training, and constructional education. His first employment was with Apex Oil in Saint Louis, Missouri. From there, he started his career in the medical field. Ricky worked at numerous medical facilities. Ricky moved to Springfield, Illinois in 1986. It was there in Springfield where Ricky met the love of his life, Tracie Briscoe. On January 1, 1999 Rev. Silas Johnson married Ricky and Tracie in Springfield, Illinois at Calvary Baptist Church. Ricky and Tracie relocated to Columbia, Missouri. Together, they enjoyed each other’s company by traveling, entertainment and spending time with friends and family. From the time Ricky was born, he was always a pleasure to be around. Ricky accepted anyone as a friend. His charismatic, infectious and loving spirit drew everyone to him. He truly loved his family, friends, playing dominos and overall, being around people. Ricky answered his call to Glory at his residence in Columbia, Missouri on January 15, 2021. He was preceded in passing by his father, George Mitchell; mother, Ella Mae Johnson; brother, George Mitchell, Jr.; and sister, Minnie Irons. Ricky leaves to cherish his memories: his wife, Tracie Briscoe Johnson of Columbia, Missouri; and six children, Terrance (Lakeysha) Day, Kishjuan Mctye, and Alonzo Johnson of Columbia, Missouri, Angela Ross and Anthony (Felicia) Ross of Springfield, Illinois and Shontres Harrison, of Columbus, Ohio. He has two sisters, Earnestine and Ruby Johnson of Springfield, Illinois. He has three brothers, James (Marisna) Washington-Johnson, Sr., of East St. Louis, Harold Washington-Johnson, of Pine Bluff, Arkansas, and Jerry Washington-Johnson of Columbia, Missouri. Ricky has multiple lifelong brotherly friends: David McCoy, Sam Scott, and the Wilson Brothers to name a few. Ricky has twenty-seven grandchildren, fifteen great grandchildren, and a host of nieces, nephews, cousins, and friends.

The family of Alphonso Ray Johnson created this Life Tributes page to make it easy to share your memories.

Send flowers to the Johnson family.