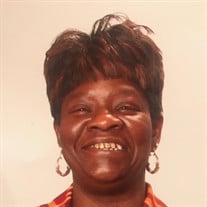 Angela Jean Roper was born on August 1, 1955 in St. Louis, Missouri to the late Mr. John E. Brown, Sr. and Mrs. Annie F. Brown (Edwards). Angela was the fifth oldest born of nine children to their union. Her husband, Leroy Roper, preceded her in death along with her parents; three brothers, John, Ronald and Chester Brown; one sister-in-law, Shirley Brown; one brother-in-law, Deacon Keith Lee, Sr.; her father-in-law, LeRoy Bates and one aunt, Johnnie Mae Lee. Angela confessed a hope in Christ at an early age. Angela received her education in the St. Louis Public School system Angela had two children; a son, Earl Wilson, Jr. and a daughter, Shanta A. Wilson. Angela held several jobs throughout her life. She worked at Venture Stores, Hutleigh at St. Louis Airport and Delmar Gardens of Chesterfield until her health started to fail. She was there approximately thirty years working in the dietary department. Angela loved her children, grandchildren, as well as her family. Angela always, for the most part, kept a smile on her face. Angela loved and enjoyed family gatherings/reunions. She loved to travel until her health started to fail. Angela married Earl Wilson, Sr., then later married LeRoy Roper in 2005. Angela joined True Redemption Center under the leadership of Bishop Alton Davis, Jr. and Pastor Michelle Davis in 2004. Angela remained faithful until her illness. Angela would help you in any capacity that she could. She had an amazing heart. Angela was an awesome wife, mother, sister, aunt, niece, as well as friend. Angela just had a way of making you smile and laugh. Her smile was contagious. She also had a serious side, when she told you to do something, she meant just “that”. Angela and her siblings, as well as nieces and nephews, were very close. Angela was a very special sister and friend whom everyone loved. Angela leaves to cherish her memories: her son ~ Earl Wilson, Jr.; a daughter ~ Shanta A. Wilson; two grandchildren ~ Miya Wilson and Earl Wilson, III (Lil Tank); one mother-in-law ~ Josephine Bates; one brother ~ Alfred Brown of Kentucky; one brother-in-law ~ Dyrell (Melissa) Bates; four sisters ~ Diane Ghee, Linda (James) Graham, Sr., Carolyn (Clifford) Hopson, Sr. and Tanglia Lee, all of St. Louis, Missouri; three aunts ~ Christine Holmes, Juanita Hicks and Leola Mayhew, all of Chicago, Illinois; and a host of nephews, nieces, great nephews, great nieces, cousins, other relatives and friends. Angela had a few people in her life that were pretty special to her: Mother Johnnie M. Davis, Paulette Johnson, Stephanie Troupe and Birdie Harry.

The family of Angela Jean Roper created this Life Tributes page to make it easy to share your memories.

Send flowers to the Roper family.