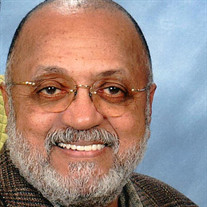 Anthony Roy Patton, Sr. was born in Saint Louis, Missouri on June 11, 1936. He was the first of two children born to the union of Anthony and Florence Patton. The family circle later grew to included his sister, Sandra. Roy, as he was affectionally called by family and friends spent his childhood living in the Ville, the Saint Louis hub of African American life. The Pattons were a close knit family and enjoyed many adventures, especially, the train trips to Arkansas with Aunt Bernice and cousin Clarence Roden. After elementary school, Anthony attended the Charles Sumner High School. Anthony was very popular and earned the nickname “Fox”. He participated in the Pan American Club and served as Artist for the Cub journal, but was most notable as a star player on the Sumner High Basketball Team. During the years, he earned All City Honors for his skills on the court. During high school, Anthony worked as a caddy for golfers in Forest Park and developed his lifelong love of the game. He was an avid golfer who played for over sixty-five years on many golf courses across the country. Anthony graduated from Sumner in 1955. After high school, Anthony met and married Ernestine Harris. They later welcomed Anthony Patton, Jr. into their family. A few years later, Anthony was drafted into the Army. During this period, he learned to drive trucks. After the Army, Anthony returned to Saint Louis and was employed by Bi-State. Later, he worked as a gasoline driver for the Standard Oil Company. Following his divorce, Anthony moved to California. While in California, Anthony met and married Norma Crofton. Two daughters, Candace and Melanie, were born to this union. Although Anthony and Norma later divorced, they remained dedicated to the care and well-being of their daughters. After retirement, Anthony moved back to Saint Louis to help care for his mother, Florence and sister, Sandra. In 2004, at the Annual Sumner High School Golf Tournament, Anthony met Yvonne Days. After a year of courtship, they married and began a beautiful life together. They travelled many years throughout the country, taking golf vacations until his illness prevented him from playing his beloved sport. After a brief hospitalization on Sunday, January 19, 2020, he departed this world. He was preceded in death by his father, sister and niece. He is survived by his wife, Yvonne; mother, Florence; children, Anthony Patton, Jr., Candace Fisher and Melanie (Jesse) Rigby; step children, Aaron Williams, Lauren (Akin) Rojugbokan and Charles Days, Jr.; eight grandchildren, Marshall Faulk, Jr., Jordan Rigby, Drew Fisher, Tatum Fisher, Jonah Rigby, Joshua Rigby, Vilca Quezada and Joel Rigby; and a host of cousins, nieces, nephews and friends.

Anthony Roy Patton, Sr. was born in Saint Louis, Missouri on June 11, 1936. He was the first of two children born to the union of Anthony and Florence Patton. The family circle later grew to included his sister, Sandra. Roy, as he was affectionally... View Obituary & Service Information

The family of Anthony Roy Patton created this Life Tributes page to make it easy to share your memories.

Send flowers to the Patton family.