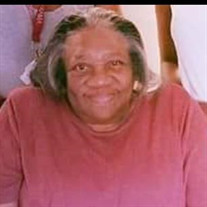 Arnita Pierce was born August 12, 1936, in Canton, MS; the eighth child born from the union of James Pierce, Sr. and Selena Sims. She confessed her hope in Christ at an early age and was a member of the Hopewell Methodist Church in Canton, MS. She also received her education in Canton, MS. Arnita moved to Lima, OH and worked as an X-Ray technician at St. Rita’s Medical Center in Lima, OH. After 40 years of employment, many accolades, honors and recognition, Arnita retired from St. Rita’s. After retirement, Arnita moved to Kansas City, MO to help care for her sisterin-law and to be near her brothers, James and Buford. Arnita was a member of Fellowship Baptist Church while she resided in Kansas City. In her later years, she moved to St. Louis, MO where she lived with her brother, William. Arnita’s final earthly residence was Manor Care Nursing Home in Florissant, MO. It was at Manor Care on Tuesday, November 1, 2016 at 9:52 p.m. after a brief illness, Arnita answered the call of the Lord to come home. Arnita was vibrant and full of life. She had such a giving spirit, kind heart and an infectious laugh. She could be a bit bossy, but she also had a way of making all who came in contact with her feel special and loved. She was a no-nonsense-speak-her-mind person, but at the end of the day, you knew that she cared. Saying Arnita enjoyed shopping would be an understatement. She shopped for her family and was awesome at finding bargains. Affectionately called “Aunt Arnita” by all, she was extremely family oriented. She was always taking trips to visit her brothers and sisters, their families, as well as other family members. You could be sure that Arnita would be around for one of the holidays, bringing laughs, and gifts. There was not a shortage of that laughter when Arnita was around. With each visit to her family’s homes, she most surely would be the main attraction and life of the party. Though Arnita didn’t have children of her own, she always made a point to spend time and help nurture many of her nieces and nephews, great-nieces and nephews, and other relatives. Arnita leaves loving memories to be cherished by: one loving brother ~ William H. Pierce (Florissant, MO); one loving sister ~ Lurella “Loretha” Pierce (Gary, IN); two sisters-in law ~ Ardell Pierce (Kansas City, MO) and Daisy Pierce (Gary, IN): and many nieces, nephews, great-nieces, great-nephews, cousins and friends. Arnita was preceded in death by her father, James Pierce, Sr., mother, Selena Sims, sisters, Geneva Williams, Helouise Pierce and Alease Jones, brothers, Ensley Pierce, Nathaniel Pierce, John Pierce, James Pierce, Jr. and Buford Pierce.

Arnita Pierce was born August 12, 1936, in Canton, MS; the eighth child born from the union of James Pierce, Sr. and Selena Sims. She confessed her hope in Christ at an early age and was a member of the Hopewell Methodist Church in Canton, MS.... View Obituary & Service Information

The family of Arnita Pierce created this Life Tributes page to make it easy to share your memories.

Send flowers to the Pierce family.