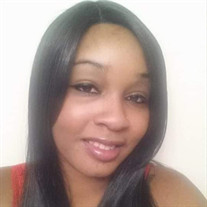 On April 20 , 1988 God decided to bless Angela and Vernon Houston, Sr. with a beautiful bouncy baby girl. Following the family tradition of using names that start with the letter “A” for girls and “V” for boys when naming their children, Vernon and Angela decided to name her Ashley Chante Houston. Ashley was the youngest of the three children born to this union. Her father preceded her in death. Ashley received her formal education through the St. Louis Public School System. She attended Stix Elementary, Mullanphy-Botanical Garden Middle and Gateway High School. She was an intelligent, witty and outgoing soul. During her formative years, Ashley developed strong friendships, strong opinions and an even stronger will. She marched to the beat of her own drum and lived by a simple credo: you only live once (YOLO). Her approach to life was unapologetic. She lived her truth and proudly embodied the traits of her adored astrological sign, Taurus (logical, stubborn, generous, kind, uncompromising and possessive). Ashley was funny and always kept her family laughing at outbursts, texts or the intentional comedic joke. The family often reminisces and laughs about the time she threatened her sister with her iconic line, "You ain't nothing, but a little shrimp and I'll throw you in a skillet and fry you". Ashley was also undeniably creative. She was a talented writer and enjoyed writing short stories and poems. If you have had the pleasure of reading any of her work, you would experience her word play, quick-wit, lively and original lyrical content. Ashley loved hard and treasured the time she spent with her family. She loved being around her family, laughing, joking and creating new memories. Her admiration for her mom, siblings, grandparents, aunts, uncles, cousins, family and friends was unmatched. Although, Ashley is no longer in her physical form, her love and strength continue to embrace, impact and surround the people she loved. Ashley will forever be remembered as a fighter. She fought a long and hard battle, always demonstrating strength and resiliency no matter the obstacle. When doctors said she could not, Ashley’s will and God’s plan said she could. Her determination to live earned Ashley the title of “Champion”. She was a true MVP and Warrior, we all can learn and be empowered by her story. On the morning of November 27, 2019, at the age of thirty-one, God called her home. After a long battle with various health challenges, Ashley can now rest peacefully and free of pain. Ashley leaves to cherish her loving memory: mother ~ Angela Houston; sister ~ Alicia Danielle Houston; brother ~ Vernon Eugene Houston, Jr.; grandparents ~ Charles Stanford Bailey, Sr., Norma Jean Bailey and Gradie Mae Houston; uncle ~ Charles Bailey, Jr.; aunts ~ Karen Pruiett, Pamela Jones (Derrin), Sandra Houston and Shante Redden; sister-inlove ~ Danielle Hughes; brothers-in-love ~ Anthony Harris and Alexander Harris; cousins ~ Tiffany Pruiett (Layla Gammage), Jamail Houston and Adrian Houston; and a host of other relatives and friends. In your memory, may we all continue to Wake up, Get dressed and Look our Best....We love you Ash ♥♥♥

The family of Ashley Houston created this Life Tributes page to make it easy to share your memories.

Send flowers to the Houston family.