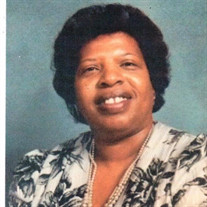 Barbara Marie (Byrd) Harris, was born in St. Louis, Missouri on February 4, 1941 to Cleophus and Dorothy Victoria Byrd. Barbara is the eldest of ten children. She gave her life to Christ at the tender age of twelve years old and was baptized in the Mississippi River during the Convocation of the Churches of God in Christ in 1953. Barbara was educated in the St. Louis School System; after graduating from high school, Barbara worked as a nurse’s aide for two years. She then attended St. Louis Board of Education School for Licensed Practical Nursing, received a diploma and was licensed by the State of Missouri as a L.P.N. Barbara worked as a L.P.N. for thirteen years before going back to school, at Barnes Hospital School of Nursing, to receive a degree in Nursing. She was licensed by the State of Missouri as a Registered Nurse. Barbara was married to Willie Keys, Sr. (who preceded her in death) and from that union three terrific children were created, Cheryl, Willie Jr. (Janet) and Wayne (Charmaine); who in turn blessed her with five wonderful grandchildren, Willie James, III, DaJuan Cortez (United States Navy), Duane Courtney (United States Air Force), Taylor Alexis and AnitaMarie in North Carolina. On February 17, 1990 Barbara married Tommy Harris (whom preceded her in death) and short thereafter on July 3, 1994, Barbara and Tommy moved to Pittsburg, Texas, where she continued to work in the health field as a Registered Nurse. After serving her community for a total forty-one years as a nurse and home health care provider, she retired in 2008. Shortly after retiring she learned about East Texas Theological Seminary, Barbara decided to attend the Seminary, to learn more about God, His Word and His way. After completing her first year of studies, and a whole lot of fasting and praying, Barbara made the decision to enter the field of Christian Counseling. Although every class was a challenge, Barbara learned a lot. The experience was well worth all the time and effort she put in graduating with a Bachelor’s and Master’s Degree in Christian Counseling. While living in Pittsburg, Texas, Barbara attended Shady Grove Baptist Church, where she was a disciple under the leadership of her awesome Pastor, Dr. Jessie Biles, Sr. After the death of her beloved husband, Tommy, Barbara moved to Dallas, Texas to live with her daughter, Cheryl. During that time, she attended New Fellowship Church of Fort Worth under the leadership Pastor Diggs. In the summer of 2019, she made another move to North Carolina and it was there she departed this life on August 26, 2019. Greeting her in Heaven are her mother, Dorothy; her father, Cleophus; her brother, Cleophus Jr.; her sister, Gwendolyn and stepfather, Willie Greer. She leaves to carry on her memories along with her children and grandchildren: her brothers ~ Abraham, Lawrence (Robbie) and Willie Jr. (Billy); sisters ~ Rhonda Jean (Dennis), Judith, Jacquelyn and Cynthia (Ron); a host of nieces, nephews, great nieces and great nephews, cousins and many close family and friends.

Barbara Marie (Byrd) Harris, was born in St. Louis, Missouri on February 4, 1941 to Cleophus and Dorothy Victoria Byrd. Barbara is the eldest of ten children. She gave her life to Christ at the tender age of twelve... View Obituary & Service Information

The family of Barbara Marie Harris created this Life Tributes page to make it easy to share your memories.

Send flowers to the Harris family.