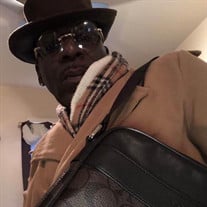 Bernard Wilkerson was born to Annie Ree Wilkerson and Clarence Johnson on October 12, 1960 in Saint Louis, Missouri. Bernard was the seventh born of eight children. His sister, Louise Daugherty and brothers, Eddie Wilkerson, Otis Wilkerson, Ozell Wilkerson and Stevie Wilkerson and his beloved son, Jabar Jones all preceded him in death. Bernard confessed his life at an early age under the leadership of Reverend Wash Yates and Reverend Steve Thompson at Southern Mission. He later became a faithful member of One Way, under the leadership of Reverend Al Grady and Reverend Alkisha Grady-Robinson. Bernard completed his secondary education with the Berkeley School District and was an Alumni of the class of 1978. He also attended Florissant Valley Community College. He worked for Mark Twain Nursing home, Saint Louis Post Office, Union Pacific Railroad and St. Luke's Hospital. Bernard loved the best things in life and he could make a five dollar item look like a million bucks. He was very creative and loved décor. Bernard loved to dress, travel and dance, he was always was the life of the party. He did not allow you to be sad around him, he loved people and always encouraged one to do and be their best. He loved to take part in family gatherings and reunions, he loved, loved his family. Bernard also loved to play bingo, like his mom did. Bernard leaves to mourn and cherish his life: his beloved daughter ~ LaNeesha Cobbs; sisters ~ Thelma Delois Wilkerson and Laratta Snider; brothers ~ Clarence Johnson, Jr., John Johnson, Jeffrey Johnson and Nel Johnson. He also leaves behind to mourn and cherish his life: his granddaughters ~ Mickyla and Mylee Cobbs-Pearson; aunts ~ Eleanor Hall (John), Florene Davie, Betty Jean Grady and Christine Tillman. He also leaves behind his uncle ~ James Johnson (Millie); along with a host of nieces, nephews, cousins, friends and neighbors that loved him. The family would also like to honor others who were in Bernard’s life, his godsons ~ Pooh, Dontaé and Daniel and longtime friends ~ Monica Chapman “Muffin”, Kelvin Topps “Top Cat” and Ms. Chris.

The family of Bernard Wilkerson created this Life Tributes page to make it easy to share your memories.

Bernard Wilkerson was born to Annie Ree Wilkerson and Clarence...

Send flowers to the Wilkerson family.