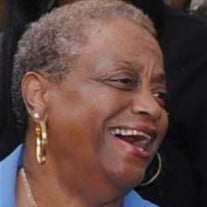 Mrs. Betty L. Lee Affectionately known as Ms. Betty, was born in Clarksdale, Mississippi to Hattie Sloan (Cables) and Beverly Johnson. Betty later moved to St. Louis, Missouri with her mom and was nurtured under the watchful eye and loving heart of her great aunt Eva White. Betty was a tomboy and liked hopping fences and shooting marbles with the neighborhood boys far more than dolls and pink hair bows, until she met her best friend of more than 60 years, Lillie Kay (Hendrix). Betty stood tall in spirit at 4’11 and mighty at heart. Love gave her four beautiful children: Cynthia Johnson (Ross), Carla Johnson, Cameron Johnson, and Chamaine Lee (Shotwell). Betty married Harold Lee Sr., who preceded her in death. Betty attended Soldan High School where three of her oldest children later attended. Early in her career, Betty worked as a teacher at Neighborhood Daycare, but her real passion was a seamstress at Levine Hat Company. During the Reagan Administration, Levine Hat Company downsized which left Betty in search of a new job. Open to a fresh start, Betty moved to Hollywood, California where her oldest daughter Cynthia lived and began a new life working in surveillance at Bank of America. Not fond of “Hollyweird” as she called it, Betty later moved back to St. Louis, the only place she could call home. For 74 years, Betty was relatively healthy and avoided hospitalization until December 17, 2015. Betty didn’t feel herself. Not wanting to alarm her family, she drove alone to the emergency room and was later diagnosed with advanced lung cancer. Like anything else in her life, tenacious Betty was prepared to fight. For over five months Betty began treatments under the expert care of Dr. Juan D. Cuevas, MD, at St. Louis Cancer Care. Betty looked forward to going to her treatments and wanted to continue, but couldn’t due to a recent seizure. Betty never regained her strength. She left this life on July 18, 2016. Preceding her in death are her parents: Hattie Cables, Beverly Johnson; (2) sisters: Carlene Cables-McFarland, Lois Jean Jackson; (1) Brother: Beverly Johnson, Jr. and great aunt, Eva White. Mama Betty leaves behind (4) children: Cynthia, Cameron (Joy), Carla, Chamaine (David); (9) grandchildren: Marvin (Claudia), Maya, Adrian (Amy), Ramon, Romeo, Constance, Cameron II, Dylan and Cai; (2) great grandchildren: Nysia and Nia. (2) Sisters; Marian (Ellehue) Washington, Anna Lenior. Aunt Betty also leaves behind a host of nieces and nephews she cared for deeply. Betty was well loved by all who encountered her upbeat spirit for life and her kindness for others. Betty would give her last to those in need. Betty (Mom) will be missed greatly. The love of a Mother can never be replaced. Mother, we thought of you with love today, but that is nothing new. We thought about you yesterday and days before that too. We thought about you in silence, we often speak your name. All we have are memories and your picture in a frame. Your memory is our keepsake, with which we’ll never part. God has you in His Keeping Hands, we have you in our hearts. Cynthia, Cameron, Carla, Chamaine

The family of Betty L. Lee created this Life Tributes page to make it easy to share your memories.

Send flowers to the Lee family.