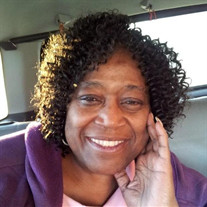 BRENDA'S JOURNEY: Brenda Smith was the third child out of 14 children born to James Sylvester Smith and Rosalie May Smith on January 30, 1948. At the age of eight Brenda and her sister Charlotte were placed into St Frances Home for Girls convent. Within three months, Brenda Smith was removed from St Frances and placed in the Meramec home for girls where she resided until she turned sixteen. In 1964 at the age of sixteen, Brenda lived with a number of family members for the next two years that included her paternal grandmother Lydia Smith, Aunt Stella and Aunt Minnie. In 1966, when Brenda turned 18, she enrolled in the Huntington Job Corps Center for Women located in Huntington, West Virginia where she was trained in business administration. After which, Brenda returned to St. Louis in 1967 having completed her Job Corp training, and enrolled into the Sumner High School’s GED program and completed her GED in 1969. Coupled with her GED and job Corp training skills in business administration, Brenda was able to secure Civil Service employment with the Federal government and worked in the following federal governmental agencies throughout her career beginning in the early 1970’s; the Army Corps of Engineers, the Environment Protection Agency, the Bankruptcy Courts, the Federal Probation Agency, the Veterans Administration, the Treasury Department, and the Internal Revenue Service and retired from Civil Service in 2008. BRENDA'S CHICAGO HOME: In the early 1970’s, Brenda moved to the Chicago, Illinois metropolitan area and became a member of the Progressive COGIC in Maywood, Illinois under the leadership of the late Dr. James B. Alford Sr. (Papa) where she served faithfully as an active member for over 40 years. Because she loved to sing, she joined the Progressive Youth Ensemble under the directions of the late Bro. Nash Shaffer and later became a member of the Senior Choir, and then the recording and concert choir named, Progressive Radio Choir. Brenda was one of the radio choir’s soloists, who led a song on the choir’s first album in 1979. She was known as a soloist who led up temple songs which blessed the people; songs like “Oh you better get ready”, “Nobody can turn me around”, and “I know what prayer can do”. Brenda travelled with the choir doing concerts and tours in various cities and states, and was one of the last soloists of the senior choir, radio choir, and the "celebration of praise choir". Brenda was also a part of the drama ministry of the church under the late Sis. Vera Grace and performed in various roles in the annual concert and drama. While at Progressive COGIC, mother Minnie Alford, her former Pastor’s wife, became Brenda’s spiritual mother and she became extremely close to the entire Alford family and to this day shares a close and special relationship with Apostle Alford and Pastor and First Lady Gloria Alford. Brenda was also a gifted speaker and became one of the churches broadcast announcers and she had an overwhelming outgoing personality and was a giver to those who had a need and enjoyed writing deep uplifting soul searching poetry and always stated, "what's from the heart reaches the heart." Brenda genuinely loved the Lord with all her heart. She didn't mind shouting, dancing and hollering out loud from her soul, when she felt like giving God praise or when she heard the word of God being preached. Brenda loved God’s word and good preaching -- but especially good teaching. She wanted the believers to know the truth and not be deceived by false doctrine or man's traditions and personal beliefs, and on June 26, 2010, Brenda became a licensed minister of the church. BRENDA'S FAMILY: While Brenda and her siblings were all separated due to a family crisis during the early 1960’s, her journey thereafter distanced and disconnected her from her immediate family. However, in 1982, Brenda was able to reconnect with them through her younger brother Gerald Smith who desired to go to college in the Chicago metropolitan area and relocated from St. Louis to live with immediately after his graduation from high school. Through that reunion, Brenda was able to reestablish her relationship with her siblings and her extended family of many nieces, nephews, and cousins alike. For Brenda, this was a blessing of untold proportions having lived and journeyed on her own for so long. Now that she had a family who wanted to know her and embrace her as a family member, Brenda affectionately positioned her-self to become the go-to Aunt for her nieces and nephews, and rarely knew how to say no -- she became Aunt Bren, and wore that crown with both pride and distinction. For those who truly new Brenda, she would regularly speak of her admiration and adoration of Winne-Woo, Woman, Tonya, and “my Chris” and “my Laiya” as she affectionately called them, but held an even stronger bond and connection with the brother she only knew of after his birth, and who forced himself into her life thirty years ago. Brenda Smith, Aunt Bren, leaves behind to cherish her memory; 14 brother and sisters, Kenneth Smith, preceded her in death, Sandra Whitley, proceeded her in death, Morris Smith, preceded her in death, Charlotte Smith, of St. Louis, MO, Lydia Wooten, of Wentzville, MO, Jami Wilson, of St. Louis, MO, Gregory Smith, of Michigan City, IN, Jimmy Smith, of St. Louis, MO, Shirley Collins, of Houston, TX, Tracy Smith, of Clinton, MD, Gerald Smith, of Kansas City, MO, Eva Smith, preceded her in death, and Aaron Smith, of Florissant, MO. 6 aunts and uncles; Earnestine Gail, preceded her in death, Charles May, of Los Angeles, CA, Arthur May, preceded her in death, and Pauline May, proceeded her in death; Minnie Smith, preceded her in death, and Stella Smith, preceded her in death; a host of nieces, nephews, cousins, great grand aunts and uncles and friends and loved ones.

BRENDA'S JOURNEY: Brenda Smith was the third child out of 14 children born to James Sylvester Smith and Rosalie May Smith on January 30, 1948. At the age of eight Brenda and her sister Charlotte were placed into St Frances Home for Girls convent.... View Obituary & Service Information

The family of Brenda Joyce Smith created this Life Tributes page to make it easy to share your memories.

Send flowers to the Smith family.