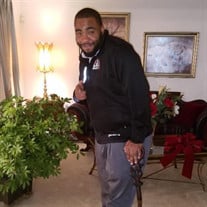 Brian Curtis Windham entered this life on December 8, 1986 in Saint Louis, Missouri. He was the oldest of two sons born to the union of Curtis Windham and Paula (Bailey) Windham. His paternal grandparents and maternal grandfather preceded him in death. Brian received his elementary education in the Hazelwood School District. He excelled at wrestling, baseball and football growing up. During high school, he was a letterman on the varsity wrestling team and the President of the student council. Brian graduated from Hazelwood Central High School in 2005. After a year of college at Southeast Missouri State, he returned to Saint Louis to later attend Florissant Valley Community College. Brian held many jobs including working with his father, Curtis, in several of his business endeavors. He was a voracious reader and used that knowledge to debate any person on any topic. Brian was big in stature and had a personality to match. Never at a loss for words, he always had something to say and wanted the last word whether warranted or not. Brian was very competitive whether it was board games, card games, video games even SCRABBLE with GRANDMA JEAN. He was most content sitting outside when the skies were cloudy and when lightening streaked across the sky. He found peace in the boom of the thunder. In 2018, Brian was hired at the Saint Louis Chess Club as part of their scholastic initiative. He found his true passion, teaching the game of chess to young people. Brian taught all ages in the Saint Louis Public Schools over the last several years, but he promised the students at Patrick Henry Elementary that he would not only teach them chess, but will continue to be a mentor to them as well. He took this promise to heart, because when he made it, he used his mother’s phrase that always brought him comfort, “I got you”. While Brian did not have children, he took pride in being his “brother’s keeper” and valued his relationship with his brother so highly. Brian departed this earth unexpectedly as he was preparing to teach a virtual chess class on Wednesday morning, July 15, 2020. He leaves to cherish his memories: his bride-to-be ~ Catherine Grace Heatley; his parents ~ Paula (Vernon) Peoples and Curtis (Tammy) Windham; brother ~ Robert Windham; grandmother ~ Jean Bailey; and a host of loving aunts, uncles, cousins and friends. Brian’s favorite Quotes "Everybody loves the sunshine" ~ Roy Ayers ~ "When you feel cold, I'll warm you and when you feel You can't go on, I'll come and hold you, It's you and me forever" ~ Hall & Oats ~ “Eragon looked back at him, confused. "I don't understand." "Of course you don't," said Brom impatiently. "That's why I'm teaching you and not the other way around.” “The sea is emotion incarnate. It loves, hates and weeps. It defies all attempts to capture it with words And rejects all shackles. No matter what you say about it, There is always that which you can't.” ~ Christian Paoli (Eragon) ~ “Dreams can become reality!” ~ Izuku Midoriya (My Hero Academia) ~

Brian Curtis Windham entered this life on December 8, 1986 in Saint Louis, Missouri. He was the oldest of two sons born to the union of Curtis Windham and Paula (Bailey) Windham. His paternal grandparents and maternal grandfather preceded him... View Obituary & Service Information

The family of Brian Curtis Windham created this Life Tributes page to make it easy to share your memories.

Brian Curtis Windham entered this life on December 8, 1986 in...

Send flowers to the Windham family.