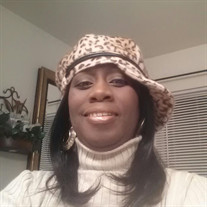 Mrs. Carla Lynette Mathis-Mullins was born June 30, 1963 to the union of Jewel and Willie Mathis, Sr. in Pine Bluff, Arkansas. Carla accepted Christ at an early age where she attended New Rock Missionary Baptist Church under the leadership of Rev. S.M. Wiggins. Her love for Christ, her family and humanity sealed her desire to continue to be a part of God’s kingdom. Carla was an active member at her home church, Beth-El Baptist Church under the pastoral leadership of Reverend Emmitt Baker until her departure. She was educated in the St. Louis Public School System where she graduated from McKinnley High School with the ‘Class of 1981’. She decided to further her education where she graduated from cosmetology school and became a distinctive business owner in the North County area. Her effortless leadership at Carla’s Hair Cartel was just one of many ways one could experience her spirit of ‘doing everything with excellence’. She continued this wonderful life in demonstrating a spirit of excellence and as a result was afforded the opportunity to meet a wonderful, kind, loving and gentle man, Jerry Mullins, who became her devoted husband. He loved her with great passion until the end of her days. She departed this life on June 23, 2016. She was preceded in death by her great grandparents, James and Rebecca Williams; her grandparents, Will and Sally Bradford. She leaves to cherish: her loving husband ~ Jerry Wayne Mullins; her children ~ Latrelle (Nakisha), LaMark, LaJavon, Christopher Jr., Cedric, Crystal, Chavonda, Lenea, Jay and Jason. Both parents ~ Jewel and Willie Mathis, Sr.; siblings ~ Jerry (Nikki), Willie Jr., Albert (Roni), Clerun, Suwan (LaKiesha), Ruth (Ronell), Terry (Curtis), Kimberly and Tracey; twenty-two grandchildren; three Godchildren; eight sisters-in-law; four bothers-in-law; her life-long friends ~ LaRoyce, Anna, Angela; and a host of aunts, uncles, nephews, nieces, cousins, friends and church family.

The family of Carla Lynette Mathis-Mullins created this Life Tributes page to make it easy to share your memories.

Send flowers to the Mathis-Mullins family.