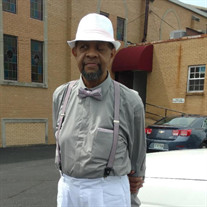 Charlie St. Claire Dean entered this world on December 3, 1946 in Saint Louis, Missouri to Pearlene Dean as the third born and the eldest son of seven children. Three of his sisters, Betty, Joyce and Kathy; two nephews, Darrio and Jaron and one nieces, Jonita, all preceded her in death. Charlie was educated through the Saint Louis Public School System. He attended Vashon High School, where he played basketball and football and graduated in 1968. After graduating he began his career with the General Motors Corporation on Union Boulevard. His career was but short in August 1969 when he was seriously injured on his way home. Charlie confessed his hope in Christ at an early age and was a longtime member of Morning Star Missionary Baptist Church, where he was taught to believe in God and prayer. You see even through his injury he never stopped praying, blessing his food and even his medication. He loved the Lord and would praise him in his own way. If you don’t believe in miracles all you had to do was look at Charlie because he was a walking and talking miracle. Charlie never lost his love for the sports of basketball and football. You could find him in front of a TV watching every game that came on and if he missed it, it was on tape. He loved playing cards, music, singing, dancing and sharing laughter with his family. Charlie’s many roles lets him leave to cherish his memory: as a father, three daughters ~ Angela, Yolonda and Shantae; as a son, his mother ~ Pearlene Dean; as a brother, siblings ~ Earl, Shirley and Neechelle; a grandfather, grandchildren ~ Tamera, Daiquire, Simon and DeAngelo; a great grandfather, great grandfather ~ Devonte and Saviona; an uncle to a special nephew ~ Thomas Daniels; and many-many other nieces, nephews, great nieces, great nephews, cousins and friends.

Charlie St. Claire Dean entered this world on December 3, 1946 in Saint Louis, Missouri to Pearlene Dean as the third born and the eldest son of seven children. Three of his sisters, Betty, Joyce and Kathy; two nephews, Darrio and Jaron and... View Obituary & Service Information

The family of Charlie Dean created this Life Tributes page to make it easy to share your memories.

Send flowers to the Dean family.