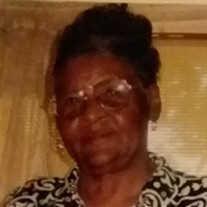 Christine Tucker was born October 14, 1931 to the union of Damon and Inola Stokes in Atkins, Arkansas. She departed this life and went home to be with the Lord on Tuesday, December 19, 2017. She received her education in the Arkansas Public School System. She relocated to St. Louis, Missouri, where she met the love of her life, Climo Tucker in 1957. They were united in Holy Matrimony in 1960. Together they raised fifteen children: eight girls and seven boys. Preceding her in death were her husband, both parents, three brothers, two sons and two daughters. Her and her husband owned and operated Tucker’s Lounge over 20 years. She worked at Barnes Hospital until she retired. She was loved and well-known by everyone who met her. She enjoyed many activities: shooting pool, fishing, sewing and most of all Bingo. She could play bingo everyday if possible. She also valued family: spending time with her children and grandchildren. Our fondest memory of our Mom is her commitment to always be there when we were sick or going through hard times. We could look forward to looking up and seeing her face staring at us. We will always remember Christmas season. It was the best time of the year for our family. She was a loving mother and wife that will be greatly missed by her family and friends. She leaves to cherish her memories: five sons ~ Stanley (Barbara), Phillip, Climo, Jerome and Derrick (Jollie); six daughters ~ Phyllis, Ruth, Deborah, Belinda (Steve), Adrienne and Laurel (Detric); two daughtersin-law ~ Sonya (Edward) and Thelma (Steven); one sister ~ Sharon; two brothers ~ Bob and Joe; twenty-eight grandchildren, twenty-eight great grandchildren, three great-great grandchildren, and a host of nieces, nephews, cousins, other relatives and friends.

Christine Tucker was born October 14, 1931 to the union of Damon and Inola Stokes in Atkins, Arkansas. She departed this life and went home to be with the Lord on Tuesday, December 19, 2017. She received her education in the Arkansas Public... View Obituary & Service Information

The family of Christine Tucker created this Life Tributes page to make it easy to share your memories.

Send flowers to the Tucker family.