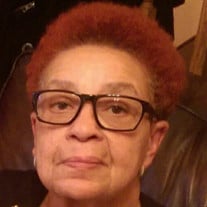 Mrs. Corrine Holliway - McGee, affectionately known to all as “Sis”, was born on February 23, 1940 in New Madrid, MO to Mr. & Mrs. Patrick (Amaboline Jones) Holliway. At a very young age, she was relocated to Fire Works Station, now known as Centreville, IL. She attended the following schools: Garrison School, Lovejoy in Brooklyn, IL, and later Cahokia High School in Cahokia, IL. Corrine was united in marriage to Lulcious McGee on November 10, 1963. After marriage, they relocated to St. Louis, MO. This union produced a legacy of love for family and friends. She transitioned on July 23, 2015 in the comfort of her home. She was proceeded in death by both parents, Patrick Holliway, Amaboline Crutcher and her Step-Father, Mr. Robert Dale Crutcher Sr., brothers, Quitila Holliway, Robert Dale Crutcher, Jr., Freddie Crutcher, Eddie Crutcher, Sr. and a dear Sister in Love, Evelyn Crutcher. Corrine was baptized at St. James Baptist Church, and in later years, joined Calvary Missionary Baptist Church. She served at Calvary MB Church under the leadership of Emeritus Pastor Albert Collins and current Pastor, Rev. Ramone Collins. She worked as an Usher, a Youth Director and for many years on the culinary committee. She was also a faithful member of the Adult Sunday School Class, and enjoyed studying with her buddy, Troy Miller. Sis enjoyed worshipping the Lord with her dear Cousin Tremylla “Trudy” Johnson and Friend Kay Morris by her side. Corrine believed in working. She started out working at a young age on the Admiral Boat. She then worked at Pope’s Cafeteria in St. Louis, MO, where she retired after 20 years of service and dedication. But, she was not content on being “retired.” She then became employed and loved working at Faith House, in St. Louis, MO. Sis had a love for children, relatives or not. At Faith House she had two favorite little friends, Richard and Terrell. She would bring them home, to family events, church and birthday gatherings. When Faith House closed, she was still not content on being “retired.” She then became employed in the Hazelwood School District until she “retired” again. Since she was “retired,” again, she volunteered for several years with Genesis Arts Ministry, chaperoning, working the Summer Camps, and encouraging and supporting young people until she really retired. This retirement meant not taking on any other jobs or projects, and actually “sleeping in,” if she desired. Corrine loved her family dearly. She attended and hosted many family functions, from family reunions, to birthday parties, weddings, graduations and just hanging out fellowshipping before and after church on Sundays. She also had a love for traveling. She traveled with the church, the women’s and girls clubs, Genesis Arts Ministry and her family. She especially enjoyed spending time in Seattle, Washington, with her son, Autry and daughter in love, Jean. Vacationing with them had almost become an annual vacation. She would spend a week or two with them in Seattle, and then they would have a family vacation Hawaii. Corrine was an active member of the National Association of Colored Women’s Club, on the Regional and State level for Illinois. On the local level, she was a Charter Member of the Reba Hill Civic, Charity and Educational Club where she served faithfully and enthusiastically as Treasurer until her transition. Surviving to cherish her memories are her loving husband, Mr. Lulcious McGee of St. Louis, MO; her son, Mr. Autry (Jean) Bishop of Seattle, Washington; Sisters, Irma Duvall, Vera M. Holliway, and Gennetta (Cosmos) Crutcher all of East St. Louis, IL; One Brother, Mr. Essex Crutcher Sr. of Centreville, IL; Sisters – In Laws; Mrs. Hazel (Elliott) Henry of St. Louis, MO; Mrs. Emma Jean McClure of St. Louis, MO; Mrs. Jeanette Jackson of Edwardsville, IL and Mrs. Deborah Crutcher of Centreville, IL; Mrs. Priscilla L. Holliway of East St. Louis, IL; and Mrs. Clara(Ron) Taylor of Cahokia, IL; Brothers – in laws, Mr. Willie(Marsha) McGee and Mr. Clarence (Evelyn) Kelly, both of St. Louis, MO; a special God – Son, Michael Stewart, Jr. of Swansea, IL; a special cousin, Mrs. Tremylla (Lawrence) Johnson; and many nieces, nephews, great nieces and nephews and great , great nieces and nephews. All will surely miss her and her giving spirit.

The family of Corrine McGee created this Life Tributes page to make it easy to share your memories.

Mrs. Corrine Holliway - McGee, affectionately known to all as...

Send flowers to the McGee family.