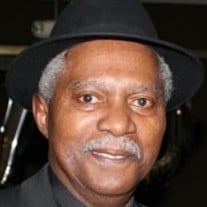 Curtis Lewis Price was born to the union of Nathan Price and Myrtle Hall-Price on February 17, 1943 in Prentiss, Mississippi. Curtis had seven siblings; Jewel Hogan and London Price both preceded him in death. Curtis attended Mount Zion Elementary School in Prentiss, Mississippi. Later, Curtis along with his grandparents, Prince and Sweetie Hall, relocated to Saint Louis, Missouri, where he continued his education and graduated from Sumner High School. Curtis began his working career at a gas station owned by the Clemon brothers, Willie and Bernard. Curtis developed a close-knit relationship with the brothers that was nurtured and maintained until this day. Later, Curtis began working for General Motors with a career that lasted over thirty years. After thirty years of service, Curtis retired from General Motors. Curtis had a genuine love for the outdoors and would catch the bus with his lawnmower, to customers’ homes in order to cut their grass. This early love for beautifying lawns, led him to become an entrepreneur, owning a successful lawn service business. Curtis was able to offer employment opportunities to many family members and friends through the success of his lawn service, all while working full time at General Motors. Curtis continued working for himself up until two years ago when he was forced to retire after many, many years. As dedicated as Curtis was to his career with General Motors and owning and operating his lawn service business, Curtis was more dedicated to his family and friends. Curtis was a wonderful father of two sons and a daughter, Curtis Price, Jr., Demetrius Price and Angelique Price, from a previous marriage. Later in life, Curtis married the love of his life, Lynda Watson and to this union, he became a wonderful stepfather to Harold Taylor, Laimmoire Taylor, Kieta McCloskey and William Watson. As a grandfather, Curtis attended countless boxing matches, baseball games, concert performances, beauty pageants and graduations, just to name a few. As a friend, Curtis was always there when you needed him; if you were sick and hospitalized, he would be one of the first ones that you would see walking through the door to check on you. Curtis had a long list of wonderful friends and had an especially close bond with Edwin Moore and James Hodges for over five decades. Curtis was called home on Saturday, June 6, 2020 with the love of his life by his side. Curtis leaves to celebrate his life and cherish his memories: his beloved wife ~ Lynda Price; sons ~ Curtis Price, Jr. and Demetrius Price (Nicole); daughter ~ Angelique Price; stepsons ~ Harold Taylor (Lisa), Laimmoire Taylor (Donya) and William Watson (Alanna); stepdaughter ~ Kieta McCloskey (Sean); fifteen grandchildren; fifteen great-grandchildren; twin sisters ~ Jacquelyn Wiggins and Jocelyn Conner; brothers ~ Donald Conner (Martha), Robert Price and Patrick Price; uncle Alphonso Hall; and his dear aunt ~ Geraldine Williams along with a host of other family members and friends

Curtis Lewis Price was born to the union of Nathan Price and Myrtle Hall-Price on February 17, 1943 in Prentiss, Mississippi. Curtis had seven siblings; Jewel Hogan and London Price both preceded him in death. Curtis attended... View Obituary & Service Information

The family of Curtis Lewis Price created this Life Tributes page to make it easy to share your memories.

Curtis Lewis Price was born to the union of Nathan Price and...

Send flowers to the Price family.