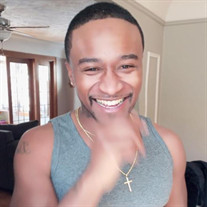 But what does it say? “The word is near you; it is in your mouth and in your heart,”[a] that is, the message concerning faith that we proclaim: If you declare with your mouth, “Jesus is Lord,” and believe in your heart that God raised him from the dead, you will be saved. For it is with your heart that you believe and are justified, and it is with your mouth that you profess your faith and are saved. ~ Romans 10:8-10 ~ Deandre QuinTon Jones was born on November 10, 1988 at Lucy Lee Hospital in Poplar Bluff, Missouri to Wavely D. Conner and Jacqueline M. Jones. Deandre graduated from Hazelwood Central High School in 2007. At the age of sixteen, Deandre began working his first job at Rally’s. Later he began his employment at Emmaus Homes where he helped people with disabilities. Deandre really liked that job, he had a heart for people, especially the elderly, homeless and those that he felt were disadvantaged. He would do whatever he could for you... give you a ride, food, money, clothes and an encouraging word. Even if he didn’t have much, he would share what he had. Deandre was a hard worker and wasn’t the type who asked for much. If he asked for something, then you knew he really needed it. Deandre believed in God and knew that there was no failure in Him. Deandre enjoyed telling people about the Lord, regardless of what he was going through. He would always share the gospel with others. If he didn’t feel he could get a prayer through, he would reach out to those who he thought could. He would be concerned about his friends. He would call me (mom) to have their names added to my prayer book or would say “pray for this person or that person”. Over the years, he has invited or taken numerous people to church. Deandre married RaShaye Page on January 9, 2009 and to this union three children were born: Deandre Jr. “Lil Dude”, Adrienne and Kimberly “Kimmie”. He later married Dequavon Gully on June 14, 2018 and to this union he gained two more children: Ahrmod and Liyah... Deandre loved all of his children... He had a very charismatic personality and a way with words, he knew how to make people feel comfortable. He loved his auntie “Annare”, who was more like his mother. Deandre departed this life on Tuesday, June 8, 2021 in Milwaukee, Wisconsin. He was preceded in death by his maternal grandparents, Eddie and Johnnie Levi; his paternal grandparents, Wavely and Annie Conner; and his aunt, Kimberly Hemphill. He leaves to cherish his memories: his wife ~ Dequavon Jones of Milwaukee, Wisconsin; his three children ~ Deandre Jr., Adrienne and Kimberly of Wentzville, Missouri; his two stepchildren ~ Ahrmod Martin and Liyah Davis of Milwaukee, Wisconsin; his mother ~ Jacqueline (Tarrence) King of Florissant, Missouri; his dad ~ Wavely Conner (Madea) of Howardsville, Missouri; his grandmother ~ Manda King of Madison, Alabama; aunts ~ Anna Jones of Springfield, Illinois and Sonja Conner (Xavier) of Milwaukee, Wisconsin; uncles ~ Eddie Levi of Maryland Heights, Missouri, Xavier (Teresa) Jones of Springfield, Illinois and Steve Wheeler (Mageela) of Swartz Creek, Michigan; brothers ~ Tajuan Moore of Florissant, Missouri, Carlos Wright of Springfield, Illinois and Antwane Conner of Columbia, Missouri; sisters ~ Kiara Jones of Saint Louis, Missouri, Shaneka Conner of Sikeston, Missouri, Dabraesha and Rasheeda Conner of Columbia, Missouri, Ladasha Powell of Howardsville, Missouri and Jada Conner of Dallas, Texas; and a host of nieces, nephews, cousins, other family members and friends.

The family of Deandre QuinTon Jones created this Life Tributes page to make it easy to share your memories.

But what does it say? “The word is near you; it is in your mouth...

Send flowers to the Jones family.