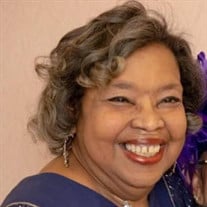 Donna Jean Kimbrough was born Friday, March 30, 1951 in Fort Wayne, Indiana to the union of Donald Eugene Russell and Margaret Helen Russell. She was preceded in death by her father, Donald Eugene Russell; grandparents, Charles Culpher, Carrie Culpher, William Otto Russell and Kathrine Russell; and brother, Robin Andrew Russell. Donna confessed hope in Christ at an early age. She was a dedicated member of New Northside Missionary Baptist Church under the leadership of the Late Rev. Dr. Willie J. Ellis, where she also carried sons to church with her. She was active on the Missions Board, Girlfriend Fellowship Connection, and she spearheaded the grant writing to fund the New Northside Banquet and Community Center. She sang in the choir while serving as a choir director, and volunteered her time until her health declined. Donna received her education from Concordia Highschool. She majored in theater and earned a Bachelor's Degree in Social Work from Valparaiso University (Cum Laude), and a Master’s Degree in Business from Maryville University, respectively. Donna married Leotis James Kimbrough on June 6, 1979. Her proudest life dream was to have children. To this union, three handsome sons were born: Devlon Kimbrough, LeDon Kimbrough, and Sean Kimbrough, of whom she loved deeply. Donna opened her home to many people who were down on their luck. She was a mother to many in the neighborhood. She was best known for her cooking. She served as a long time Civil Rights activist for the Black Panther Party and was an active member of the Historic St. Louis Dred Scott commemorative committee. She was instrumental in hiring the first 600 African American employees at McDonnell Douglas. She was the only woman selected by Mac to travel to Japan to train and serve as company consultant for Lean Six Sigma and helped implement millions in cost savings initiatives. She was the coordinator for the first Miss Black America Pageant in California. Even in her illness, she remained selfless in helping others, rather than thinking of herself. Donna leaves to celebrate her life and cherish her memory: her devoted mother, Helen Russell; her loving sons, Devlon (Jennie) Kimbrough, LeDon Kimbrough, Sean Kimbrough, and bonus son, Jonathon Montgomery; her brothers, David (Carol) Russell and Mark Russell; her grandchildren, M’Kane Knox, Kyra Kimbrough, Kailise Kimbrough, Brianna Mabins, Tayln Kimbrough, Zariah Kimbrough, Xavier Atkins, Croix Kimbrough; her one and only husband, Leotis Kimbrough; and a host of family and friends

The family of Donna Jean Kimbrough created this Life Tributes page to make it easy to share your memories.

Send flowers to the Kimbrough family.