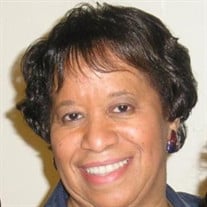 Doreen Elizabeth Sykes was born to the union of Willie Ford and Dessie Ford on July 13, 1939 in Forest City, Arkansas. She was the fifth of eight children. Doreen accepted Christ at an early age, attending The Church of Christ Disciples in Caldwell, Arkansas. There she sang with her sisters, Barbara and Floretta, known as the “Ford Sisters”. When she moved to Saint Louis, Missouri she joined Cote Brilliante Presbyterian Church where she continued to sing in the Chancel Choir, served on the Women’s Association, The Boosters and taught Vacation Bible School. She most recently joined Beth-El Baptist Church with her family. Doreen graduated from Lincoln High School in 1957. It was at Lincoln High School where she was a majorette in the marching band, sang in the school choirs and met the love of her life, Abell Sykes. Doreen received her Bachelor’s of Science Degree in Music Education in 1962 from Kentucky State College. There she performed in the Concert Choir. She later received her Master’s Degree in Social Studies at Webster University. Her passion and love for education led her to a successful teaching career for many years in the Wellston School District. She received many accolades. Her passion for excellence and discipline changed the lives of many young people. She is fondly remembered by her students and peers. She was an accomplished pianist and also enjoyed sewing. Doreen was united in Holy Matrimony May 28, 1962 to Abell Sykes. To this union, one son, Edward L. Sykes and one daughter, Stacey M. Sykes-Gladden, were born. Doreen transitioned from this life on March 14, 2022 in Saint Louis, Missouri surrounded by her children. Preceding her in death were her parents, husband, Abell Sykes and siblings, Lecester Ford, Addie Alcorn, Brice Ford and Lee Opal Ford. Doreen leaves to cherish her memory: her son ~ Edward (Jennifer); daughter ~ Stacey (Ezel Jr.); her adoring grandchildren ~ Isaiah Ali, Rachel Sykes, Steven Gladden and Julian Gladden; sisters ~ Barbara Brooks and Floretta Baker; brother ~ Glenn Ford and a host of nieces, nephews, relatives and friends.

Doreen Elizabeth Sykes was born to the union of Willie Ford and Dessie Ford on July 13, 1939 in Forest City, Arkansas. She was the fifth of eight children. Doreen accepted Christ at an early age, attending The Church of Christ Disciples in... View Obituary & Service Information

The family of Doreen E. Sykes created this Life Tributes page to make it easy to share your memories.

Doreen Elizabeth Sykes was born to the union of Willie Ford and...

Send flowers to the Sykes family.