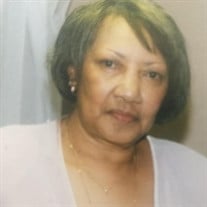 Dorothy Mae Vasser-Whitley, lovingly known as “Dot” was born in Aberdeen, Mississippi on August 11, 1935 to the union of Clarence and Effie Arlene Fort. She was the oldest of three daughters that included Thelma Jean and Shirley Ann. Dot’s parents and Thelma Jean preceded her in death. Dot professed her faith in Jesus Christ at an early age and she attended Shivers High School. At the tender age of fifteen, Dot began her married life with her beloved, Willie Gene Vasser, Sr. They united on January 6, 1951 and shortly after moved to Saint Louis, Missouri; together they raised their three devoted children, Willie Gene Vasser, Jr. “Butch”, Stephen Ray “Steve” and Carla Maria, along with raising a loving nephew, Robert L. Brand. Dot and Willie were married forty-five years until the death of Willie on September 15, 1996. Dot’s first son, Butch also preceded her in death. While married and raising children, Dot worked full time as an Unit Manager in the emergency room of Cardinal Glennon Memorial Hospital for Children. After forty dedicated years of employment she retired in 1998. Shortly after retirement, Dot reconnected with her childhood friend, Walter E. Whitley. They courted, fell in love and were blessed with a beautiful wedding on May 26, 2001. Walt brought life, love and adventure into Dot’s life. He was a loving husband, caretaker and protector until she departed this life on August 2, 2020. Dot was a meticulous and beautiful woman. She had her own classic style and loved all genre of music. She was gifted with the ability to knit, sew, crochet, she had an eye for colors and was a phenomenal cook. She loved cooking for her family and her family loved her cooking. Dot welcomed everyone into her home with a fabulous meal. If she fed you, you were definitely part of the family. Dot loved the Lord and carried a servants heart and a grateful spirit. Dot was a member of Gallilee Missionary Baptist Church, Bridgeton Baptist Church and Compton Hill Missionary Baptist Church. She has served as a Deaconess and Usher in the Women Ministries and many others until illness confined her to her home. Sweet memories will linger with: her devoted husband of nineteen years ~ Walter E. Whitley; sister ~ Shirley Bazemore-White; children ~ Stephen (Chanita) Vasser and Carla (Ron) Trammell; grandchildren ~ Jason (Tonya) Vasser- Elong, Jada (Gary) Bell, Wendi Trammell, Stephen Vasser, II, Pete (Noelle) Trammell, Wesley (Brianna) Trammell, Caitlin Vasser, Chazz Vasser, and Nikki Trammell; sixteen great grandchildren; and a host of loving family and friends.

Dorothy Mae Vasser-Whitley, lovingly known as &#8220;Dot&#8221; was born in Aberdeen, Mississippi on August 11, 1935 to the union of Clarence and Effie Arlene Fort. She was the oldest of three daughters that included Thelma Jean and Shirley Ann.... View Obituary & Service Information

The family of Dorothy Mae Vasser-Whitley created this Life Tributes page to make it easy to share your memories.

Send flowers to the Vasser-Whitley family.