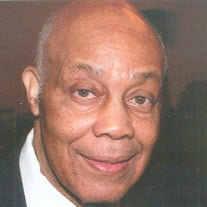 The Chronology of My Journey “A Time to be Born” Eddie P. Winchester was born on May 30, 1930 in Scott, Mississippi to Eddie Thomas and Annie Stewart Winchester. He is the youngest of two children-one older sister, Willie Mae (Dan Wilson). “A Time to Grow” Over the next four years while living in Greenville, Mississippi with his uncle and aunt (Richard and Matilda Bell) he gave his life to Christ and was baptized at Sunrise M.B. Church in 1941 and he attended Coleman High School. At age fifteen Eddie P. moved to St. Louis, MO. He graduated from Sumner High School. In his eagerness to learn, he attended a trade school and a business college. He went to serve our country in the U.S. Army during the Korean War. “A Time to Love” While in the process of deciding his field of employment, he was hired at the Mayfair Hotel. It was there that he met the love of his life, Ioma Louise Gilliam. She was a salad girl. Their courtship lasted three months and on October 10, 1948 they were united in holy matrimony. Anyone who has known them for a length of time knows that when introducing his wife he would always say “I just wished that I could have married her sooner” and because he was only eighteen years old and she didn’t know it. She would say, “I kept wondering why his mother had to sign.” On September 16, 1954, Eddie P. and Ioma became the proud parents of their only child, Chanita Iroma (Stephen Ray Vasser). His circle of love extended to two grandchildren (Chazz Amoi and Stephen Ray II), two great-grandchildren (Sha’Mya Renee and Carly Amori), very loving and dedicated niece and nephew-in-love (Willie and Ann Wright) and a host of loving family members and friends. “A Time to Plant and a Time to Pluck up That Which is Planted” Eddie P. was a gambler like his daddy (cards & pool shark), but God’s perfect timing changed his life into a loyal, faithful “Man of God.” He became a caring, dedicated member of the Galilee M.B. Church under the leadership of Rev. Dr. Isaac Charles Peay, Sr. December 1954. He continued his service to Christ when the torch was passed to Rev. Dr. Carlton Ray Caldwell. His delights included: • Sunday School Teacher • Layman • Sang using his melodious tenor voice with Glee Club and Men of Galilee • Deacon/Trustee • Chairman of the Deacon Board In 2010, he and his devoted wife moved their membership to Compton Hill M.B. Church under the leadership of their son-in-love, Pastor Stephen Ray Vasser. He continued being a Deacon and sang with the Men of Compton Hill. He served as Past Worshipful Master and Treasurer with the Prince Hall Masonic Lodge Claude Wise 171 and received a 40-year membership award in 2008. Eddie P. loved bowling. He was known as “Left-Handed Windy” and traveled to Cincinnati, Ohio yearly for tournaments. His team represented Winchester Realty. Work Career: As early as five years of age, Eddie P. lived and worked on a cotton plantation. After working the fields, he would then go to church school. He held a variety of jobs as a young man and went on to secure employment with Krey Packing Company where he worked until they closed their doors. Even though he cleaned chitterlings all day, when the day ended he and his co-workers would leave dressed in suits. From there his gift of gab proved to promote him to be a charismatic real estate salesperson. Brown & Brown Kortkamp, Broker Elisha Broker, equipped him with the ability to describe every brick in a house. He became the Broker/Entrepreneur of the Winchester Realty and Investment Company, 4300 Goodfellow Blvd. at the corner of Goodfellow and McLaran for over 40 years. Twenty-seven of those years Chanita worked side by side with him selling existing and newly built homes in subdivisions that qualified the company to be represented in the St. Louis Realtor Association’s Million Dollar Club. Chanita took over the business as Broker in 1996. Eddie P. Winchester never sang this song, but he lived the lyrics: If I can help somebody as I pass along, then my living shall not be in vain. We know he was a notary that didn’t charge fees just accepted love tokens; a tax preparer who normally charged half; a realtor who would give up his commission to make sure his clients would get a home. His home was always open to help a family member or friend which is why it took a while for Chanita to understand that everyone who stayed in their home was not her brothers and sisters. Everyone knew that his beautiful, loving wife, Ioma would make sure they were well fed. “A Time to Rest” Eddie P. Winchester answered his Master’s call on Sunday, May 8, 2016. “Our Hearts Speak” “Pop, your presence helped me to miss my Dad a litle less! Thank You! Your Son-In-Love, Stephen “Daddy, you instilled Godliness, loving kindness of a parent, willingness to conquer any challenge, life-sustaining qualities of a Winchester because you are ever-present. I love you always” Your One & Only Daughter, Chanita “Granddad, you have not only educated me about Stacy Adams or how to bowl like a pro and even how to drive, but you showed me the art of the hustle and how to keep it professional.” Your Number One Grandson, Stevie “Granddad, I will forever represent Winchester/Vasser in the way you told me and I will raise Carly that same way. I love you.” Your Number One Granddaughter, Chazzy Pall Bearers Stephen Ray Vasser II Fate Martinez Rooks DeWayne Gholston, Sr. Preston Wingo,Sr. Byron Wright Brian Wilson Honorary Pall Bearers Compton Hill M.B. Church Deacons Galilee M.B. Church Deacons Claude Wise Lodge 171 Special Thanks The family of Eddie P. Winchester wishes to express their sincere thanks to each and everyone. We love you

The Chronology of My Journey &#8220;A Time to be Born&#8221; Eddie P. Winchester was born on May 30, 1930 in Scott, Mississippi to Eddie Thomas and Annie Stewart Winchester. He is the youngest of two children-one older sister, Willie Mae (Dan... View Obituary & Service Information

The family of Eddie Winchester created this Life Tributes page to make it easy to share your memories.

The Chronology of My Journey

Send flowers to the Winchester family.