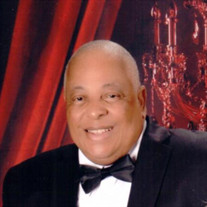 Emanuel Paul, III was born on June 7, 1951 in Shreveport, Louisiana to the late Emanuel Paul, Jr. and Levada D. Paul. Emanuel was the second of four sons. At an early age he moved to Wellston, Missouri with his parents. His family called him by his nickname “Butch”. At Wellston High School he was quite an athlete was name “All American” in football. He remained active through voluntary support of the STL Blues Track Team, where his children participated. After high school, he attended Fort Lewis College in Colorado, but returned home to help his family. He later enlisted in the Air Force. Upon Discharge he attended Florissant Valley Community College, where he received an Associated Degree. He was hired by McDonell Douglas (Boeing) and retired after thirtyfive years. The following year he met and married the love of his life, Evelyn, who has remained by his side for thirty-five years. Emanuel continued to show a zeal for spiritual growth and he enrolled and graduated from Laei University, accepting his call to the ministry. He joined Memorial Christian Life Center under the late Rev. Walter Harper and was ordained in March 2012. As a member of the Ministerial Staff, he continued to give occasional sermons and worked in various areas of the ministry. He took great joy as co-chair of the Men’s Bible Study Group. He also found a way to tablk about the Bible and God’s blessings. One final goal of Rev. Paul was to complete his formal education. In 1997, his dream came true. He graduated from Fontbonne College with a BS Degree in Business. He leaves his cherished memories to: a devoted an loving wife ~ Evelyn; siblings ~ Horace Holden (deceased), Charles Rodney (Tammy) and Aaron (Anna); his children ~ Kevin, Erica, Erin, Jessica, Emanuel E. and Leslie (John) Smith; grandchildren ~ Kevin Jr. , Kierstin, Keyshawn, Rashad, Olivia K., Marianne, Kamyrn, John Raymond, Jalik, Olivia, Joy and Jai; two great grandchildren; and a host nieces; nephews with special mention of Carol Ford and Aaron Muhammad Paul. He will be greatly missed by friends and family as well as church family.

Emanuel Paul, III was born on June 7, 1951 in Shreveport, Louisiana to the late Emanuel Paul, Jr. and Levada D. Paul. Emanuel was the second of four sons. At an early age he moved to Wellston, Missouri with his parents. His family called him... View Obituary & Service Information

The family of Emanuel Paul III created this Life Tributes page to make it easy to share your memories.

Send flowers to the Paul family.