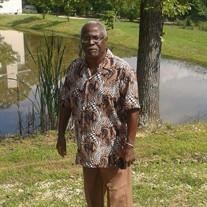 Ervin Lampley, Jr. was born on August 7, 1955 at Homer G. Phillips Hospital in Saint Louis, Missouri to the union of Mollie Martha Webb and Ervin Lampley, Sr., both whom preceded him in death. Ervin grew up in Saint Louis, where he attended Simmons Elementary and Turner Middle School. While in attendance at Sumner High School in Saint Louis, Ervin participated in the Marching Band, Concert Band and Jazz Band (where he jammed on the saxophone). He was active on the Wrestling team and a member of the Chess Club. He graduated from Sumner in 1974. After high school, he obtained a college degree in Architectural Design. Ervin later went on to marry and to this this union his son, Ervin Lampley III was born in 1984. In the 1980’s, Ervin began to study the teaching of the Islamic Religion and subsequently became a Muslim. Ervin held a strong work ethic, starting his first job as a shoeshine boy at the age of eleven. He had a heart for service which led him to hold many service roles throughout his life. He served as a production manager for eleven years at Star Binding Manufacturing, where he oversaw an over-the-road truck driver which led to his love for being on the open road. He often reminisced about the beautiful cities that he visited and the scenery that he saw during his travels. He later became a lead driver for St. Elizabeth Senior Care until his health started to fall which led to his retirement. Ervin was often affectionately referred to as “Junebug”, a nickname he received from his father. He had an infectious laugh and a wicked sense of humor. He knew no strangers and would strike up a conversation with anyone, at any time. He had a strong will and yet a loving soul. He loved to tease his siblings, but he was also very protective of them and never hesitated to offer aid. Ervin never wanted to miss an episode of The Young and The Restless to where he would end a phone conversation when it was time for show to come on. Ervin kept his mind sharp through reading and playing chess. He loved to play his saxophone which was his most cherished possession (displayed). Ervin departed from this life on Monday, December 21. 2020 at 7:05 a.m. at Christian Hospital Northeast in Saint Louis, Missouri. His eldest sister, Carrie Mae Hodge, preceded him in death in February 2020. He leaves to cherish his memory: his lifetime love ~ Marsha Butler; his son ~ Ervin Lampley III; his granddaughter ~ Tyra Lampley; his siblings ~ Martha Jones, George Lampley (Lucretia), Mary Haney, Jerome Lampley, Lynn Freeman (Calvin), Wilda West (Reginald), Ervine Fox (Henry) and Isaac Lampley; one surviving aunt ~ Susie Mae Cotton and a multitude of nieces, nephews, cousins, other relatives and friends.

The family of Ervin Lampley Jr created this Life Tributes page to make it easy to share your memories.

Send flowers to the Lampley family.