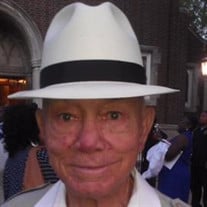 Ezell Turner was born January 29, 1931, in Preston, Mississippi, to the union of Brooks and Annie (Lampley) Turner. He was the eleventh of seventeen children. In 1950 Ezell joined the US Army and was honorably discharged in 1953. Ezell met and married Frances Davis on October 26, 1955 in Macon, Mississippi. They moved to St. Louis, MO shortly after where they made their home. He was a father of six children. He believed in the Lord Jesus Christ and regularly attended Original New Pilgrim Missionary Baptist Church to receive the word of God. Ezell believed in working hard and taking care of his family. He retired from the St. Louis Housing Authority after thirty five years as a Maintenance Supervisor. Ezell refused to sit down or go fishing. So, he then picked up part-time jobs to keep him busy working as a lawn care specialist and landscaper, Brand Ambassador for Red Lobster, and he was the first shuttle bus driver for Don Brown Chevrolet. Ezell was a well-known and well-loved man. He was known for his great sense of humor, his infectious personality, and his great smile. It brought him joy to give to others, which he often did without looking for any recognition. Ezell did not know a stranger. He loved his family, friends, and co-workers, and only wanted the best for all. Ezell was preceded in death by two children, his son Brooks Ezell, and daughter Priscilla; his parents, Brooks and Annie (Lampley) Turner; and eight of his siblings, Gert, John, Artist, Nolan, Marvin, Varis, Edna, and Thermon. Ezell’s biggest joy was his family. He leaves to cherish his memory: his devoted and loving wife, Frances Turner; four children, Gwendolyn Holloway (Don), Pamela Glasper (Stewart-Victor), Carlene Stayton (Michael), and Carlos Turner (Ronald); fourteen grandchildren, Ezell III, Allen (Jacqui), Skyla, Tamika (Daveatte), Adreian, Frank III (Shantana), Taniesha, Trina, Markesha, Michael Jr, Dr.Alicia (Michael), Shontai (James), Donnette, Mellanee; Eight siblings, Hazel, Mildred (Zora), Earline, Magnolia, Ruth (Donald), Artgredis, William (Earline), Lamar (JoAnn); and a host of great grandchildren, nieces, nephews, cousins, and friends.

Ezell Turner was born January 29, 1931, in Preston, Mississippi, to the union of Brooks and Annie (Lampley) Turner. He was the eleventh of seventeen children. In 1950 Ezell joined the US Army and was honorably discharged in 1953. Ezell met... View Obituary & Service Information

The family of Ezell Turner created this Life Tributes page to make it easy to share your memories.

Send flowers to the Turner family.