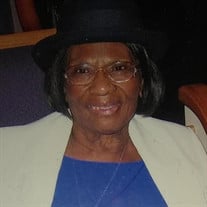 Fannie Hazel Griffith was born in Jackson, Mississippi to the parents of George Griffith and Sadie Jackson. She was their only child. She was educated in the State of Mississippi. She met and married Bennie Calhoun and to this union one child was born, Bennie Calhoun, Jr., who preceded her in death. Fannie later moved to St. Louis, Missouri. She was employed by Hollis and Suit Laundry until she retired. On December 6, 1974, Fannie married the “Love of Her Life”, George Haynes. He preceded her in death in, 1993. Fannie confessed her hope in Christ and was baptized by the “late” Rev. Percy Lee, Sr., Pastor of Union Vine Missionary Baptist Church, were she served as a faithful and dedicated member. Upon meeting Evangelist Gregory and after attending multiple revivals, Fannie was baptized “In Jesus’ Name” on August 28, 1974, by Elder Oscar Cannon. She was filled with the Holy Ghost four days later. After the Lord called Dr. Gregory to go into full-time evangelism and became Pastor of the True Gospel Church of God, where Fannie became her first member (she was one of the Holy Ghost Twelve). She served the church for many years, until her health began to fail. She served as Sunday School Superintendent, Sunday School Teacher, Leader of the Choir, Choir Director, President of Pastor’s Aide, Prayer Warrior, Usher and she cleaned the church every Saturday. Fannie was loved by all who met her, and if you ever want to get a prayer through, just ask “Mama Fannie” (in her voice): “I’m Praying for the Nation”. She was not ashamed to Praise God and let you know how good God is. She leaves to cherish her memories: one granddaughter ~ Ligita Barnett (Stacey); one grandson ~ Michael Thomas, Sr.; one daughter-in-law ~ Shelia Calhoun; nine great grandchildren ~ Anthony Miller, Sr. (Karen), Aaron and Antoine Miller, Harold, III and Harrison Graves, Max Curtis, Michael Jr., Montez and Khaleel; eight great-great grandchildren ~ Anthony Miller, Jr., Artrell Miller, Ayana Miller, Maliak Curtis, Max Curtis ,III, Makhi Curtis, Madison Curtis and Mega Curtis; and a host of godchildren, one special devoted friend ~ Wilmer Strong; and her girl ~ “Keisha”, her caretaker for many years and her entire True Gospel Family.

Fannie Hazel Griffith was born in Jackson, Mississippi to the parents of George Griffith and Sadie Jackson. She was their only child. She was educated in the State of Mississippi. She met and married Bennie Calhoun and to this union one... View Obituary & Service Information

The family of Fannie Hazel Haynes created this Life Tributes page to make it easy to share your memories.

Fannie Hazel Griffith was born in Jackson, Mississippi to the...

Send flowers to the Haynes family.