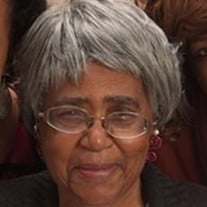 Frances “Ruth” McCall Bull was born on April 24th, 1926 in St. Louis, MO. She was the daughter of Harry McCall and Augustine Gooden. She also had a step father named George Turner and to that union she had a brother Pharaoh Turner and 2 sisters Ann Turner and Audrey (Williams) (who preceded her in death). Frances’ family church was Compton Hill Baptist Church. Frances attended Vashon high school, where she loved to sing and had aspirations to become a nurse. She was married young to Jethro Bull who passed April 1970. Being an African American woman in the 1930’s and 40’s, Frances never complained about anything however; she recounted about her lack of rights as a woman. Through it all, she gave birth to 9 children, (7 boys and 2 girls), who she raised with lots of help and support from her Aunts Ada Patterson. Clementine Middleton, as well as her Mother-In-Law Virgie Adams and a host of other relatives and close family friends. While Frances often talked about there being a shortage, she definitely had no shortage of personality. Those who were blessed enough to really know her, could never forget her. To most she seemed quiet, sweet and unassuming. The real Frances was fun loving, talkative and quite the comedian. A devout Christian, she loved to read and colorfully quote the bible. She also loved reading, listening to music, playing Bingo and Pokeno and working large print word seek puzzles. Her favorite color was green, and she loved to make sure that her nails and toes were polished. Frances was a true St. Louisan, loving Chinese food, White Castles, ice cream and beer. She also enjoyed the finer things like iced coffee, Werther’s Originals (candy period), honey goat cheeses and crackers. She like to hang with her family including her grand and great-grand children and her friends at the Lacy Clay Senior living center until her health began to fail, and she moved to Oak Park Senior Center last year. She made a quick graceful transition July 19th at St. Mary’s Hospital peacefully with her daughter Barbara, her grandchildren Addam and Miranda and their children Amour, Addison, and Alaila (great-grands) close by her side. Frances had 9 children, 3 of which preceded her in death Jeffery, Robert and Richard Bull. Left to cherish her memory are her six surviving children and their spouses: Barbara Hamilton (Robert), Pauline Dedrick (David), Edward Bull (Linda), Charles Bull, Harry Bull and Cedric Bull (Katrina). 13 grandchildren (Morna Onishile (Tunji), Addam Jones (Miranda), Marsha Reyes (Arturo), Ericka Bennette Heller (Rovon), Nathan Bull (Kavann), Keenan Bull (Angela), Tanisha Stubblefield (Charlton), Journi Walker, Brashanti, Isiah, Damon and Cassandra Bull. At least 18 great grandchildren, some of which include David, Christian, Amour, Addison, Alaila, Aavery, Anna, Adrienne, Audriell, Moriah, Ava, Caleb, London, Josiah, Ashley, Michael, Julian, Steven and a host of other family, friends and care takers.

Frances &#8220;Ruth&#8221; McCall Bull was born on April 24th, 1926 in St. Louis, MO. She was the daughter of Harry McCall and Augustine Gooden. She also had a step father named George Turner and to that union she had a brother Pharaoh Turner... View Obituary & Service Information

The family of Mrs. Frances Bull created this Life Tributes page to make it easy to share your memories.

Send flowers to the Bull family.