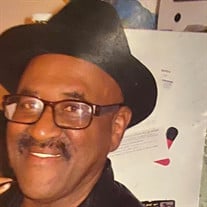 Frankie Allen Ward was born on April 20, 1947, in St. Louis, Missouri, the youngest child born to Clara and Ivory Ward, Sr. both of them preceded him in death. He was educated in the St. Louis Public School System, where he attended Bates Elementary School and graduated from Vashon High School in June of 1967. He studied shoe repair in addition to the Missouri State requirements. After graduation from high school Frank joined the C.O.R.E. organization. This was an organization that was fighting for black people’s civil rights. As a member he participated in several sit-in and was arrested several times because blacks were not allowed in a lot of buildings, hospitals or stores during the 1960’s. He marched with other members of this organization when there were riots or black issues to be solved. Frank remained an active member until the members disband in the early 1970’s. He really enjoyed being an activist during the Civil Right Era. He confessed his hope in Jesus Christ at an early age. He joined Greater Mt. Airy Baptist Church under the leadership of Rev. Murphy Turner. Frank became the father of two daughters and a son, his daughter Carmen preceded him in death, Carla and Terrence were born prior to him marrying Michelle Alexander in 1981. From their union two more daughters, Stephanie and Kimberly were born and adopted another son, Adrian. Frank loved to travel and take trips with all his kids, friends, nieces and nephews. Also, he enjoyed celebrating the holidays with family and friends. As the younger daughter grew up, and started to get interested in sports, he coached Central Catholic Girls’ Basketball Team for about four years. He was a sports fanatic, then as the younger children graduated from elementary school. He went back to school to learn to repair automobiles at Forest Park Community College. When he completed his auto repair classes, he decide to open and start an auto repair business with his cousin, Junior. He had two liver transplants, and was diagnosed with Polio disease at the age of three. Frank departed this life to his eternal home on January 21 at 8:30 a.m. He leaves to cherish his memory: three daughter, Carla (Terry) of St. Louis, MO., Stephanie (Damon) of Indianapolis, IN and Kimberly of St. Louis, MO.; two son, Terrance of St. Louis, MO and Adrian of Indianapolis, IN; one brother, Ivory Ward, Jr. (Lois) and one sister, Mattie Graham both from St. Louis, MO; ten grandchildren, nieces, nephews, great nephews, cousin, friends and any other lives he touched.

Frankie Allen Ward was born on April 20, 1947, in St. Louis, Missouri, the youngest child born to Clara and Ivory Ward, Sr. both of them preceded him in death. He was educated in the St. Louis Public School System, where he attended Bates Elementary... View Obituary & Service Information

The family of Frankie A. Ward created this Life Tributes page to make it easy to share your memories.

Send flowers to the Ward family.