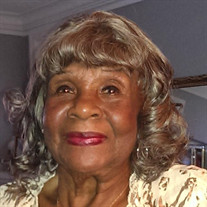 Willie Betty Johnson was born on January 28, 1938 to the union of Anna and Thomas Johnson, and reared by her mother and step-father Willie Cartwright. She was the first born of six children in the household, her siblings included: Alice, Pearl, Mary, Barbara and Gregory. Willie B. married Robert Green in 1954 in Caruthersville, MO, and to that union was born Beverly, Robert and Eleah. Adopting the name Genean in adulthood, she relocated to Aurora, Illinois, and married her current husband Terry Long in 1975. To that union was added one child, Marvin. Genean was educated in the Chicago and Caruthersville public school systems, and then moved on to higher education as a licensed practical nurse. She received Christ and was baptized at the St. Paul Baptist Church in Caruthersville. She attended Greater Love Missionary Baptist Church in Aurora for more than 35 years. She loved her church community led by Pastor and Sister Neighbors. They were her best friends until the very end. Genean was a prayer warrior and many were healed by the gift that God gave her. She loved going to church and shopping. She especially enjoyed cooking meals for her family and decorating the house. Jewelry was her thing. She had impeccable taste in fashion and interior decorating. Genean transitioned from this life on Wednesday, November 8, 2017. She was preceded in death by both parents Anna and Willie Cartwright, and two sisters, Alice Hollywood and Mary Cagle. She leaves to mourn her passing: two sisters, Pearl Williams and Barbara Rodgers (Tee Willis); a brother, Gregory Cartwright; her husband, Terry Long; sons Robert Green (Diana) and Marvin Long; daughters, Beverly Robinson and Eleah Berry; her grandchildren, Neiva, Chunetil, Conethia, Opal (Robert), Adrianne, Charlena, Donitha, Aretta, Willard, Danielle and Robert; 21 great-grandchildren, Elajayii, Ime, Tela, Deandria, Rachel, Kendrick, Zaniah, Khari, Cameron, Cymone, Anthony, Zaire, Robert “Logan,” Isaac, Victoria, Willard III, Quentin, Christin, Timothy, Daija, Daniya; and two great-great-grandchildren, Aria and Caiden.

Willie Betty Johnson was born on January 28, 1938 to the union of Anna and Thomas Johnson, and reared by her mother and step-father Willie Cartwright. She was the first born of six children in the household, her siblings included: Alice, Pearl,... View Obituary & Service Information

The family of Genean Long created this Life Tributes page to make it easy to share your memories.

Send flowers to the Long family.