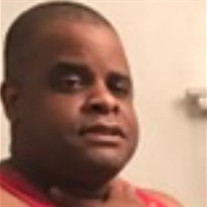 Gerald Demetrius Watson was born on Tuesday, September 23, 1969, in St. Louis, Missouri, where he was the oldest son of Adlean and Anthony. Gerald was preceded in death by his baby brother, Leonard Watson, and grandparents, O.L. and Enos Thomas and his dad, Bill Tucker. Gerald was a member of Mt. Beulah Missionary Baptist Church, where he confessed to hope in Christ, and was baptized at an early age under the leadership of Pastor Shields. Gerald went on to serve the Lord there. Gerald sang in the choir with a beautiful voice and he also participated in youth ministries. Gerald received his education at the Academy of Math and Science High School in St. Louis, Missouri, where he played Basketball and ran Track and Field. Gerald graduated at an early age of just 17 years old in 1987. After many disappointments with not finding a job, Gerald decided to leave his life behind in St. Louis to join the United States Air Force in 1987. Gerald had a talk with his mom, Adlean, she had to make a very difficult choice of signing her oldest son over to the Air Force at such a young age. Gerald went on to do great achievements while enlisted in the United States Air Force. Gerald made Sgt. in no time. Gerald had received many medals. *AF Achievement Medals, *AF Outstanding Unit Award, *AF Good Conduct Medal with Oak Leaf Cluster, *AF Training Ribbon, *AF Longevity Service Award Ribbon, *NCO Professional Military Educ Grad Ribbon with 1 Leaf Cluster Sgt. Gerald Demetrius Watson was an outstanding solider. Gerald was enlisted in the U.S. Air Force for six years. Gerald served three years in Desert/Shield/ Storm from August 2, 1990 - December 28, 1993. Gerald met Jacqueline in Salt Lake City, Utah where he served at Hills Air Force Base. To this union, a baby boy was born, Darien J. Watson. Gerald was a very hard worker and had perfect attendance in the work field and it did not go unnoticed. Gerald worked at Salt Lake City Medical. Gerald also worked at UPS for five years and he also did what he did best, working with youth as a Youth Counselor. Gerald decided after 15 years to return to St. Louis, Missouri where he resided with his mother, Adlean. After retiring from the U.S. Air Force. Gerald decided to get a job at St. Louis Lambert Airport at Whelan Security from 2003-2011. While working, Gerald also decided to attend UMSL College. Gerald received many outstanding conduct certificates, employee of the month and perfect attendances. After eight years of great service, he became ill in 2011 and decided to retire for good. Gerald transitioned from this life on Thursday December 13, 2018 at 8:30 a.m. in his home. Gerald leaves to mourn: his only son ~ Darien J. Watson; his dear mother ~ Adlean; his favorite baby sister ~ “Tee-Mama” Teresa; his sister ~ Yolanda Tucker; his brothers ~ Mike and Anthony; two favorite nieces ~ Ke-Ke and Shremaine; two favorite nephews ~ Justin and Jermaine; a very special great aunt ~ Elise Carter; grandparents ~ Adolphus and LerLean Watson; and a host of aunts, uncles, cousins and a best friend ~ Jason Hargrove.

Gerald Demetrius Watson was born on Tuesday, September 23, 1969, in St. Louis, Missouri, where he was the oldest son of Adlean and Anthony. Gerald was preceded in death by his baby brother, Leonard Watson, and grandparents, O.L. and Enos... View Obituary & Service Information

The family of Mr. Gerald Watson, created this Life Tributes page to make it easy to share your memories.

Send flowers to the Watson family.