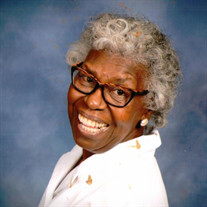 On December 19, 1944 in Clarksdale, Arkansas to the union of Otis and Louise Shepherd was blessed with their second child, a daughter, Gloria Gean Shepherd. Her father, Otis Shepherd and mother, Louis Shepherd; mothers-inlaw, Annie and Dorothy and sister-in-law, Eloise all preceded her in death. Gloria Shepherd was raised in the city of Kinloch, Missouri, where she attended Dunbar Elementary School and graduated from Kinloch High School in 1962. Following graduation she attended Saint Louis Community College - Florissant Valley. Gloria confessed a hope in Christ at a young age under the leadership of the late Wash Yates at Southern Missionary Baptist Church on 5600 Lehouge in Kinloch, Missouri. She continued her membership under the leadership of Bishop Steven G. Thompson and followed him to Leonard Missionary Baptist Church in 1989. While a member at LMBC she had many positions from Sunday School Teacher, Culinary Team, Health Unit and Trustee. She was dedicated in all her duties to the very end. Gloria demonstrated exceptional work ethic during her career in employment. She began at Country Set Clothing Store. Moved onto Continental Can Company from there she transitioned to LMI Aerospace Inc. and finally retired as a Clerk from The City of Hillsdale. On July 20, 1968, Gloria married James Stewart, who preceded her in death. The Lord blessed Gloria and James with one daughter, Valerie. Gloria was honored to raise both of her grandchildren, Erica Jones and Jeremy Ruff. Gloria devoted her life to God, her husband, her daughter, grandchildren and family. No matter what role Gloria played - be it mother, grandmother, Trustee or friend - she was an organized woman who handled business many people called on her to help facilitate and plan church events, government meeting and family functions. She was quick to contribute and “make donation”. She was devoted in everything she did. And was only a phone call away. Despite her aliments Gloria remained positive and as active as possible until her retirement July 1, 2020. God called her home early Tuesday morning September 29, 2020. She will be dearly missed. Gloria leaves to cherish her life: Her loving daughter ~ Valerie; her grandchildren ~ Erica and Jeremy; great grandchildren ~ Zyir, Zackary, Zion, Zy’Mire, Azaria Madyson, Javon, Zy’azion and Dallas; sisters ~ Earline Shepherd, Annie Young, Wanda Shepherd Thomas (Melvin), Ray Maxine MgGee (Ricky) and Myrtle Shepherd; sisters-inlaw ~ Margaret (Lee), Mary (Marvin), Mildred, Annette (Ralph), Anita Stewart; and a host of nieces, nephews, cousins and long time friends.

On December 19, 1944 in Clarksdale, Arkansas to the union of Otis and Louise Shepherd was blessed with their second child, a daughter, Gloria Gean Shepherd. Her father, Otis Shepherd and mother, Louis Shepherd; mothers-inlaw, Annie and Dorothy... View Obituary & Service Information

The family of Gloria G. Stewart created this Life Tributes page to make it easy to share your memories.

Send flowers to the Stewart family.