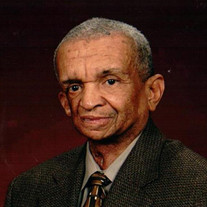 Harlan Brooks, Sr. was born on September 29, 1936 to the late Percy and Callie Brooks in Macon, Mississippi. God gently touched him in his sleep on Saturday, July 22, 2017 and took him home. One brother, Hayden and one sister, Coral preceded him in death. He accepted Christ as his Lord and Savior at the age of twelve and remained active at the Sylvian Ridge Missionary Baptist Church in Macon, Mississippi. In 1965, he moved to St. Louis, Missouri and united with the membership of Southern Union Missionary Baptist Church under the leadership of Rev. R.V. Madison. There he dutifully served as an usher while continuing his walk with the Lord. Later in 1965, Harlan met Stella. The two were united in Holy Matrimony on March 11, 1967. Upon the blessed union, God bestowed three children; Harlan Jr., Coretta (who died as an infant) and Rodney Alan. Later in 1967, the family became an active part of the vibrant membership of Antioch Missionary Baptist Church under the leadership of Rev. William Collins, Jr. Harlan again took up the charge as usher serving on the 2nd Sunday Usher board. In 2006, Harlan and Stella became active members of Olivet Missionary Baptist Church where he continued as an active usher through the years. Harlan always valued education. He graduated from Noxubee County Schools. He became a proud graduate of what today is known as the Sonic BOOM of the SOUTH, the Jackson State University with a degree in Industrial Education. He worked teaching students for over 30 years, first at his high school alma mater and in St Louis within Kinloch School District and Special School District. He specialized in Technical Vocational Prep courses with a firm belief that young people should be taught a trade with which they could provide for their families in subsequent life. Harlan leaves to cherish his memories: wife of 50 years ~ Stella; sons ~ Harlan Jr. (Kelly) and Rodney (Kimberly); grandchildren ~ Ariana, Jaelen and Devin all of the greater Kansas City area; five brothers ~ Howard, of Tuscaloosa, AL, Percy Jr. (Gloria) of Jackson, MS, Wil (Linda) of Charlotte, NC, George (Ethel) of Jackson, MS and Bruce (Annie) of Macon, MS; three sisters ~ Drew (Sylvester) of St. Louis, MO, Lillian of Columbus, MS, and Hazel (Dennis) of Macon, MS; one sister-in-law ~ Deloris; a host of nieces, nephews, cousins, relatives, friends and the Olivet Family. Harlan Sr. Will Be Missed By All!

Harlan Brooks, Sr. was born on September 29, 1936 to the late Percy and Callie Brooks in Macon, Mississippi. God gently touched him in his sleep on Saturday, July 22, 2017 and took him home. One brother, Hayden and one sister, Coral preceded... View Obituary & Service Information

The family of Harlan Brooks created this Life Tributes page to make it easy to share your memories.

Send flowers to the Brooks family.