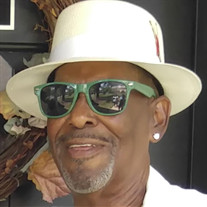 Harold Hugh Curry was born February 16, 1953 to Jesse Curry and Bessie Smith-Gill in St. Louis, Missouri. He was educated through the St. Louis Public School System and attended Soldan High School. He went on to further his education at a combination of Mechanical Tech Schools earning several certificate levels in Automotive Mechanics. He was a United States Postal worker, mechanic, musician and driver throughout his life. He later retired as a trainer from a local school bus company. Harold H. Curry could be easily described as an ambitious leader full of wisdom who always shared ideas of success. He built a lifestyle that entertained the sounds of live music and old school albums. He professed his life to Christ at a young age and was a God fearing man. He attended services every Sunday at Friendly Temple Missionary Baptist Church in St. Louis, Missouri. He donated ample time at local shelters by lending a listening ear and sharing positive advice. Harold always had a giving heart and was willing to help anyone in need. Above all, “Dad” was always ready to climb mountains for any of his children. Harold had a love for music bands, motorcycles and clean classic cars. He was the bass guitarist of the Crescent Band. He enjoyed building his motorcycles up and wiping his cars down. He had a charming smile that would light up any room... even with the lights out. He had a style that was beyond sharp, yet debonair, always clean and smelling good. He was always well groomed and his stylish scent awakened others with a smile as he came into their presence. Harold Curry departed this life on earth the morning of Tuesday, February 5, 2019. His father Jesse Curry, his mother Bessie Smith-Gill and his brother Kenneth Sims, all preceded him in death. Harold leaves to cherish his memories with an abundance of love for: his children ~ Patricia Curry-Thompson, Anthony Martin, Roshonda Curry, Anissa Curry, Elisabeth Curry and Louise Curry; his sisters ~ Robena Harvin and Yvonne Waddy; his brothers ~ Edward Harrison and Frank Sims. He also leaves great memories with an abundance of grandchildren (15); great-grandchildren (4); nieces, nephews, great nieces, great nephews, cousins, his devoted friend ~ Deide Phelps, several life long friends and a host of long time friends.

Harold Hugh Curry was born February 16, 1953 to Jesse Curry and Bessie Smith-Gill in St. Louis, Missouri. He was educated through the St. Louis Public School System and attended Soldan High School. He went on to further his education at a combination... View Obituary & Service Information

The family of Mr. Harold Hugh Curry created this Life Tributes page to make it easy to share your memories.

Send flowers to the Curry family.