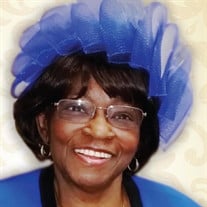 In lieu of flowers the family of Hazel L. Henry requests that donations be made to the New Northside Baptist Church Scholarship Fund. For more information about this scholarship fund you may click the website: https://www.newnorthsidebaptist.org/. Life Reflection Hazel Lee McGee Henry was born December 28, 1937 and departed this life, Tuesday, April 21, 2020. She was the fourth of ten children born to the parents of Robert and Artenise McGee. Hazel’s parents, three sisters, a brother, and son Kenneth Lamar Henry all preceded her in death. Hazel was born in Starksville, Mississippi and attended OCTS High School where she graduated with honors in 1957. She moved to St. Louis, Missouri and began working as a fountain waitress at McClary Store, which was later bought by Woolworth’s. Hazel was united in holy matrimony to Elliott Henry in 1958 and from this union three sons were born: Kenneth, Garry and Derek. Hazel loved her family and took pride in caring for their home. She also enjoyed hosting holiday gatherings, traveling with family to both new and familiar destinations, and making beautiful flower arrangements. Hazel saw the beauty of salvation revealed from God and became a believer and follower of Christ at the age of twelve. She was baptized at Springhill Baptist Church in Mississippi. After relocating to St. Louis, she worshipped dutifully with the congregation at Morning Star Missionary Baptist Church. She later joined New Northside Missionary Baptist Church under the leadership of the late Bishop Willie J. Ellis, Jr. She was a faithful servant of New Northside for more than fifty years. Hazel lived a full life in keeping with God’s will. She loved working with the entire congregation and was actively involved in Sunday school, Missionary Society, and Health Unit. Hazel was a student of the Bible locally and at Christian conferences, earning various certificates along the way. In 2016, Pastor Rodrick K. Burton asked her to join the New Northside Mother’s Board, where she served dutifully, and on May 12, 2019, was honored as “Mother of the Year.” Mother Henry used her gifts and talents to honor God and made the most of every opportunity to praise His Holy name. She especially loved the song “Goin’ up Yonder,” and always kept it in her spirit. Mother Hazel Lee McGee Henry leaves to celebrate her life, her devoted husband of sixty-one years, Elliott Henry; two sons, Garry (Tracy) Henry of St. Louis and Derek Todd Henry of St. Louis; one granddaughter, Tyann Lee Henry; four grandsons: Christopher Henry, Davion Henry, Cameron Henry and Devontae T. Henry; two great grandchildren: Sa’Rayh Shanelle Henry and Davion Maurice Henry, Jr.; five siblings: Lucious McGee, Willie (Marsha) McGee, Clarence (Evelyn)Kelly, and Emma Jean McClure of St. Louis, and Jeanette Jackson of Edwardsville, Illinois; six brothers-in-law, two sisters-in-law, a host of nephews, nieces, cousins, other relatives and dear friends.

In lieu of flowers the family of Hazel L. Henry requests that donations be made to the New Northside Baptist Church Scholarship Fund. For more information about this scholarship fund you may click the website: https://www.newnorthsidebaptist.org/.... View Obituary & Service Information

The family of Hazel Lee Henry created this Life Tributes page to make it easy to share your memories.

In lieu of flowers the family of Hazel L. Henry requests that...

Send flowers to the Henry family.