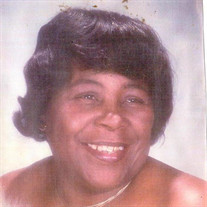 Henryette Luckett was born to Jimmie Lee and Lawrence Small, both of whom preceded her in death, on May 10, 1937 in Bentonia, Mississippi just outside of Yazoo City. Henryette was the fifth born of ten children. Her three brothers, Lawrence Small, Herman Small and J.W. Harkless, Sr. and one sister, Annie Ree Wilkerson, all preceded her in death. Henryette confessed her life to Christ at an early age. On June 14, 1955, she united in Holy Matrimony to Tommy Luckett, Sr., who preceded her in death. To this union six children were born: Shirley, John, Rose, Tommy Jr., Annette and Glenn, who preceded her in death. She later gave birth to two sons: Robert and Joseph. In years to come, Henryette established a special relationship with J.J. Stupps. As a young girl, Henryette attended church faithfully under the leadership of her uncle, Reverend Wash Yates, and Reverend Steve Thompson at Southern Mission Missionary Baptist Church. Later in Henryette’s adult life, she became a member of St. James Church. She later became a Mother at One Way Missionary Baptist Church under the leadership of Alkisha Robinson. Henryette provided for her family by working as the Head Chef for Anheuser Busch and Lamberts. She was also the Nanny for both the Busch and Stupps family. Henryette loved ceramics, upholstery, traveling and she was a member of the Unique Social Club. Henryette loved cosmetology so much she obtained her degree from Ferguson Beauty College. Henryette departed her life on earth on Monday, November 28, 2016 surrounded by family. Henryette leaves to mourn and cherish her life: seven of eight children ~ Shirley Luckett, John Luckett, Rose Clark, Tommy Luckett, Jr., Annette Luckett, Glenn Luckett (who preceded her in death), Robert Luckett and Joseph Luckett; five sisters ~ Marylee Harrison, Eleanor Hall, Florene Davie, Betty Jean Grady and Christian Tillman; twenty-seven grandchildren; fiftyfour great grandchildren; one great-great grandchild; and a host of nieces, nephews, cousins and friends that all loved her.

Henryette Luckett was born to Jimmie Lee and Lawrence Small, both of whom preceded her in death, on May 10, 1937 in Bentonia, Mississippi just outside of Yazoo City. Henryette was the fifth born of ten children. Her three brothers, Lawrence... View Obituary & Service Information

The family of Henryette Luckett created this Life Tributes page to make it easy to share your memories.

Henryette Luckett was born to Jimmie Lee and Lawrence Small,
both...

Send flowers to the Luckett family.