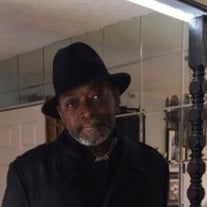 Mr. Herbert Lee Brown was born August 6, 1956 in St. Louis, Missouri to Lillie Brown and James Bailey. Herbert was the oldest of four children: Tamra, Terianne and Charmella. Of his siblings, his sister, Tamra Johnson, preceded him in death.... View Obituary & Service Information

The family of Herbert Lee Brown created this Life Tributes page to make it easy to share your memories.

Send flowers to the Brown family.