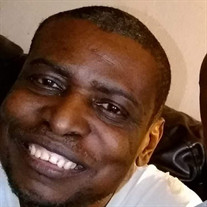 Ian Laird Wolff, affectionately known to family and close friends as “Larry”, was born December 16, 1964, in Saint Louis, Missouri to the marriage union of Marshall and Edith Wolff, both of whom preceded him in death. Ian was educated in the St. Louis Public School System and is a 1984 graduate of Grover Cleveland High School. After high school, Ian pursued several business and educational undertakings. Over the years, he worked in various commercial and retail establishments throughout Saint Louis. It was not uncommon for Ian to promote and sustain himself and his family through his personal talents and broad technical abilities. Ian possessed an aptitude and gift for carpentry, home improvement and landscaping. He was proud of his ability to take something in disarray and transform it into something beautiful. Throughout his life, Ian frequently mentioned the things for which he was most proud and appreciative. He believed the most valuable asset in his life was his personal relationship with his Lord and Savior Jesus Christ. Ian was born into a large family and family was, indeed, the cornerstone of Ian’s life. He was the sixth of his parents’ eight children. He loved and cherished his relationship with each of his seven brothers and sisters, two of whom preceded him in death. Ian relished the thought of starting a family of his own. The opportunity to do so was manifested when he met his life partner, Linda Cummings. Together, Ian and Linda blended into a beautiful family relationship, which produced between them, their youngest son, Kendall Isaiah Wolff. Ian’s generosity and love for people, would compel him to open his home to nearly anyone he saw was in need. His passion for cooking large family meals and barbecuing on any given occasion, endeared him to friends and strangers alike. Ian’s outgoing and energetic personality, and his inherent desire to see everyone around him safe and happy, made him a sheer pleasure to be around. He was a loving and wonderful father, life-partner and so much more to so many. Ian transitioned from this life on December 25, 2019. He leaves to mourn his passing: life-partner, Linda Cummings; three children, Lloyd Martin, Evita Cummings and Kendall Wolff; two sisters, Lynda Ajayi and Marsha Butler; three brothers, Jerald Wolff (Deirdre), Harvey Wolff (Annette) and Gregory Wolff (Benita); along with a host of close relatives including cousins, nieces, nephews and extended family.

Ian Laird Wolff, affectionately known to family and close friends as &#8220;Larry&#8221;, was born December 16, 1964, in Saint Louis, Missouri to the marriage union of Marshall and Edith Wolff, both of whom preceded him in death. Ian was... View Obituary & Service Information

The family of Ian Laird Wolff created this Life Tributes page to make it easy to share your memories.

Send flowers to the Wolff family.