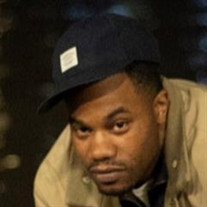 Jabari Andwele Foxworth Waheed was born to the union of Khatib Amin Foxworth Waheed and Loretta Netterville Waheed at St. Louis City Hospital in Saint Louis, Missouri on July 28, 1983. True to his namesake, Jabari was a brave and satisfying gift from God. The tumultuous but blessed life journey of Jabari serves as a true testament of God’s love, grace and mercy. At the tender age of six, Jabari was diagnosed with hypertrophic cardiomyopathy, a life threatening heart disease effecting the heart muscle’s ability to pump blood, that often goes undetected until it is too late. Although his childhood years were filled with love, family and boyish adventures, it was an undeniable reality that he was always at high risk of sudden death. As he grew older, his heart began to weaken further. As a result of another person’s tragic demise, and God’s mercy, Jabari was given a new gift of life as the recipient of a successful heart transplant surgery. On January 12, 2005, God granted Jabari “a second birthday.” The physical limitations imposed by his heart condition opened the pathway for Jabari to discover, develop and channel a new found creative talent in music and other artistic entrepreneurial interests. He became a member of a drum line group in middle school and during his teen years, Jabari along with some of his closes lifelong friends, created a rap group called The Vault Entertainment. But the rigors of live, onstage performances soon proved to be too strenuous for his condition. Yet, throughout the many peaks and valleys of his life until the very end, Jabari remained a good human being who was a strong Believer. Introduced to God at an early age through the teachings of both Al-Islam and Christianity, Jabari in his later life confessed his hope for Salvation through the life and teachings of Jesus Christ and joined St. Paul A.M.E. Church in Saint Louis, Missouri under the Reverend Spencer Lamar Booker. Jabari graduated from Soldan International Studies High School in 2001 and began to study the Humanities at St. Louis Community College. Blessed with a very special gift and passion to uplift others, Jabari packaged that gift in his compassionate, playful and magnetic spirit to work effectively with children. He spent most of his vocational years working with youth in the fields of social service and education; most recently, as an Instructional Classroom Assistant with St. Louis Public Schools. During the last two years of Jabari’s life, his heart began to slowly show signs of failure developing into additional health complications. On Wednesday evening, December 4, 2019, Jabari’s heart failed him for the last time as God sent His Angels to bring him home. He was rich in family, who as a member of a large extended family, leaves behind to cherish his life and memories: his loving parents Khatib and Loretta Waheed; three sisters and one brother, Stephanie Foxworth, Dalila Waheed-Spencer, Mariama Waheed and Changa Foxworth; his loving maternal grandmother, Katherine Netterville; numerous aunts, uncles, nephews, nieces, cousins, in-laws and a host of friends and acquaintances, who will never forget his charismatic personality, selfless spirit, cool walk, infectious smile and long and colorful stories. Through Allah’s Mercy that was manifest through the many advancements in medicine and technology, we were granted additional years to spend with our beloved Jabari A.F. Waheed. Although we would have certainly liked to have been granted more time, we know that God is the Best Knower. So we pray that Allah will forgive Jabari’s sins and short comings and grant him entrance into Paradise where we believe he will suffer no more and have everlasting life.

Jabari Andwele Foxworth Waheed was born to the union of Khatib Amin Foxworth Waheed and Loretta Netterville Waheed at St. Louis City Hospital in Saint Louis, Missouri on July 28, 1983. True to his namesake, Jabari was a brave and satisfying... View Obituary & Service Information

The family of Jabari Andwele Foxworth Waheed created this Life Tributes page to make it easy to share your memories.

Jabari Andwele Foxworth Waheed was born to the union of Khatib...

Send flowers to the Waheed family.