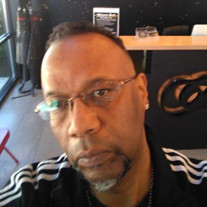 James Toney Tyus, II, age 50 was born on January 9, 1971 in Saint Louis, Missouri to the late James Toney Tyus, Sr. and Eunice Piphus Tyus. He was the older of two children. Toney departed this earthly realm and went home to be with the Lord on August 30, 2021. Toney was a Christian and accepted Christ as his Savior at an early age when becoming a member of Northern Missionary Baptist Church in Saint Louis, Missouri. Toney loved the Lord and showed it in his interactions with others. Toney attended and graduated from Hazelwood Central High School in Saint Louis, Missouri where he played football and was on the wrestling team. After graduating from high school, he attended Southern University and A&M College in Baton Rouge, Louisiana. He later transferred to ITT Technical Institute where he received his degree in technology. Upon graduation, he accepted a position with the Intel Corporation in Portland, Oregon working as an Engineering Technician, building and manufacturing many of the Intel devices that we all use today. Toney worked with Intel for 20 years and resided in Portland, Oregon until his death. Toney was a smart, loving, caring and giving person. He never met a stranger, and almost everyone he met became his friend. His joyful approach at life is what made him special to be around. He could light up a room with his infectious smile and laugh. Toney had a relationship with God and he not only loved God but he also loved his family, friends and his coworkers. When Toney was out on medical leave, many times he mentioned how he really liked working at Intel and couldn’t wait for when he could return back to work. The love Toney shared with others was always apparent. His outgoing temperament, joyful spirit, and infectious smile made an indelible mark on everyone he encountered. Toney had a deep passion for life and believed in maximizing every moment. Along with enjoying working at Intel with great supervisors and co-workers, two other great enjoyments of his life were becoming a Mason with Lodge No 12, in Saint Louis, Missouri and according to him, learning the stock market and trading stocks; he really got a kick out of it. He leaves to cherish his memory; his loving sister ~ Kimberly Tyus; three uncles ~ George L.Tyus (Ruby), Charles V. Piphus, Sr. (Rosa) and James Eric Reed (Kristal); two aunts ~ Attorney Carolyn Piphus and Carol Piphus; best friends and play brothers ~ Carlos Jenkins (and family) and Lorenzo Poindexter (Veronica); and a host of cousins, friends, co-workers and special friends who all loved him and will all miss him dearly.

James Toney Tyus, II, age 50 was born on January 9, 1971 in Saint Louis, Missouri to the late James Toney Tyus, Sr. and Eunice Piphus Tyus. He was the older of two children. Toney departed this earthly realm and went home to be with the Lord... View Obituary & Service Information

The family of James Toney Tyus created this Life Tributes page to make it easy to share your memories.

Send flowers to the Tyus family.