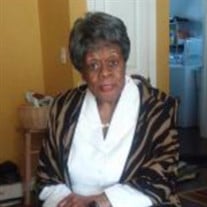 The very loveable and caring Mother Janie Thompson was one of twelve children born to the union of Jab and Lucille Lay in Lula, Mississippi. Janie was born on March 13, 1933. After her mother became a widow, the family moved to Saint Louis, Missouri in the early 40’s. She attended Dunbar School. After her mother passed, she and her siblings were raised by their oldest and devoted sister, Jessie Burris and her husband. The family attended Lively Stone Church of God, where they were taught and nurtured in the knowledge of Jesus Christ. Janie later met and married her late husband, Brother Willie “Bill” Thompson in 1951. To this union, three children were born; two daughters, Maxine and Barbara and one son, the late Brother Sheldon Bernard Thompson. In 1968, Janie gave her heart to the Lord under the pastorate of the late Bishop James A. Johnson at Bethesda Temple Church. She later became an active member of The Cathedral at The Crossroads under the late Pastor James A. Drysdale and Interim Pastor Carol Scott and current Pastor Eric F. Bland, remaining faithful over forty years to the church. She loved her church family as well as her biological family! As a member at the Cathedral she served in many capacities; choir member, soloist, Sunday school teacher, member and treasurer of the Mother’s Board. She also enjoyed one of her favorite hobbies, learning to play gospel songs on her piano and keyboard. Through life’s journey and difficulties, Mother Thompson would rely on her favorite songs for deliverance, “In the Name of Jesus We Have the Victory” and “Oh I want to See Him”. She read the scriptures daily and one of her most favorite passages is Psalms 91, “He that dwelleth in the secret place of the most High shall abide under the shadow of the Almighty.” Janie worked at Dobbs Int’l and later at Jennings School District. Her Family Remembers and Mourns Their Loss: Mother Thompson leaves to cherish her memory: her two devoted daughters ~ Maxine Thompson and Barbara Williams; one granddaughter ~ Monique Varner; two grandsons ~ Dominic Varner and Bryan Williams; four great grands ~ Dominic Jr., Brionna, Zoeé and Larenzo; two great-great grands ~ Ava and Dominic III — all of Saint Louis, Missouri; three siblings ~ Mrs. Willie Mae Graves of San Antonio, Texas, Mr. Johnny Lay of Alameda, California and Mrs. Jabbie Welle of Saint Louis, Missouri. There is also a host of nephews, nieces, in-laws and a plethora of friends to mourn her loss. *At this time the family lovingly remembers and acknowledges Derrick Cortez Williams, a deceased loving grandson

The very loveable and caring Mother Janie Thompson was one of twelve children born to the union of Jab and Lucille Lay in Lula, Mississippi. Janie was born on March 13, 1933. After her mother became a widow, the family moved to Saint Louis,... View Obituary & Service Information

The family of Janie Lay Thompson created this Life Tributes page to make it easy to share your memories.

The very loveable and caring Mother Janie Thompson was one of...

Send flowers to the Thompson family.