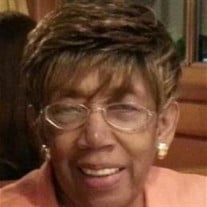 Jeanette Marie (Bell) Nelum was born on February 12, 1929 in Houston, Texas to Sister Plessie Baker Carr and Isaac Bell. She and her sister, Evelyn (Bell) Hall, were raised by their grandparents, Ella Baker and Horace Baker, in Alexandria, Louisiana, next door to the family grocery store. She and her sister were known in the neighborhood as the trend setting “Baker Girls”. Jeanette was the singer, giving concerts atop soap boxes waiting for all the kids to applaud. Jeanette possessed exceptional mathematical skills even as a small child. She often amazed the fruit and vegetable suppliers because she was able to keep an accurate count as they delivered their goods to the store. She later graduated top of her class from the local catholic school. Jeanette moved to Omaha, Nebraska (1948), where she spent most of her adult life. She met and married the love of her life, Milton Joseph Nelum on October 16, 1959. The two were inseparable and were long time active members of Zion Baptist Church in Omaha, Nebraska. While at Zion, she served as a Willing Worker and Vice-Chairman of the Priscilla Mission Circle, where she was eager to prep a meal for a sick or distressed friend, share a kind and encouraging word to those known and unknown. Jeanette was an Eastern Star (49 years) past Matron of Princess Oziel, Chapter 11, OESTHA Nebraska jurisdiction. Jeanette moved to Saint Louis, Missouri (2005) to be closer to her grandchildren/great grandchildren and will forever be remembered for her kindness, generosity of spirit and cooking. Jeanette entered eternal peace on October 12, 2019. She was preceded in death by her parents, Sister Plessie Baker Carr and Isaac Bell; sister, Evelyn (Bell) Hall; husband, Milton Joseph Nelum and daughter, Saundra Brown. She leaves to cherish her memories: one grandson ~ Corey Joseph Gulley (Lora) of Saint Louis, Missouri; two great grandsons ~ Chandler Josrel Gulley and Caden Alexander Gulley; two nieces ~ Tamla Hall (Lyndell) of Alexandria, Louisiana and D’Rhonda Richardson of Norfolk, Nebraska; one sister-in-law ~ Brenda Kelley Nelum (Aldolphus) of Woodbridge, Virginia; and a host of nieces, nephews and friends. Memorial donations may be made on behalf of Jeanette Nelum to the Alzheimer’s Association or Diabetes Association

Jeanette Marie (Bell) Nelum was born on February 12, 1929 in Houston, Texas to Sister Plessie Baker Carr and Isaac Bell. She and her sister, Evelyn (Bell) Hall, were raised by their grandparents, Ella Baker and Horace Baker, in Alexandria, Louisiana,... View Obituary & Service Information

The family of Jeanette Marie Nelum created this Life Tributes page to make it easy to share your memories.

Send flowers to the Nelum family.