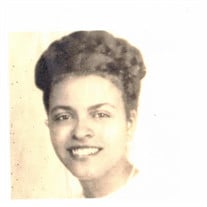 Jeannette Mae Jackson Parks, born on December 24, 1927 in St. Louis, Missouri, was the second of two children born to the union of James Jackson and Minnie Jones Jackson. Her parents and brother, Raymond preceded her in death. Jeannette’s love of God and her spiritual journey began at an early age. She was a baptized (November 25, 1934) and confirmed (May 24, 1942) member of St. Philip’s Evangelical Lutheran Church where she remained a devoted and faithful servant throughout her life. She graduated with honors from Sumner High School in 3 ½ years. In 1950, according to a local newspaper article, she was the “first of her race to receive the A.B. Degree in Sociology from Webster College.” After graduation, she taught at the segregated J. Milton Turner School of Meacham Park and in 1955, she was among the first group of “Negro” teachers chosen to move to the newly integrated Kirkwood High School, where she taught until she retired in 1982. In 1970 she earned a Master’s Degree in Education from St. Louis University. She married Eugene “Bush” Parks on December 23, 1956, and their abiding love and adoration for each other flourished for 49 years. After his death in 2005, she continued to live her life doing all the things she loved: maintaining her independence, worshipping, playing bridge, traveling, shopping, and socializing. Jeannette was a surrogate grandmother for a number of nieces, nephews, church families, friends and former students. While she was known to give a stern lecture, she always followed it with a compliment or words of encouragement, some candy, and maybe a dollar or two for good grades, and respecting your parents. She truly believed that children are the hope for the future and she felt that every child deserved love. In addition to the host of nieces, nephews, friends, family and former students, Jeannette leaves behind a cousin, Minnie Mae Jackson of Chicago, Illinois to mourn and cherish her memory. “Love never faileth.” “I walk along with God.” The Lord has heard my prayer; the Lord take up my plea.” Psalm 6:10

Jeannette Mae Jackson Parks, born on December 24, 1927 in St. Louis, Missouri, was the second of two children born to the union of James Jackson and Minnie Jones Jackson. Her parents and brother, Raymond preceded her in death. Jeannette&#8217;s... View Obituary & Service Information

The family of Jeannette Mae Parks created this Life Tributes page to make it easy to share your memories.

Send flowers to the Parks family.