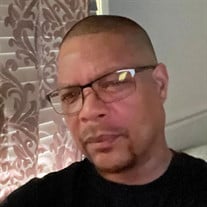 Jeffery Leemannzes Jefferson was born on Sunday, May 30, 1971 at the historic Home G. Phillips Hospital in Saint Louis, Missouri to the Freddie Lee and Glenda Ellison. As a child, he was taken to Fort Rucker, Alabama, where he attended Wallace Elementary School. Jeffery was a baptized believer since 1983. Later, his family returned to Saint Louis and he attended University City High School. Jeffery was a graduate in the Class of 1990. Following graduation, he studied at the Florissant Valley Community College, where he majored in General Studies. On Tuesday, April 20, 1999. Jeffery was united in Holy Matrimony with his high school sweetheart, Ericka Treneice Banks. Rev. William A. Foster served as the celebrant for their ceremony. To this union, three daughters were born, twins, Eryn Trenae and Eryonne Leigh and Jaylee Evonne. Jeffery was a loving and dedicated family man with a vibrant personality. He also cared deeply about nature and animals, especially his dogs. Jeffery was a prolific conversationalist, enjoyed cooking and fishing and playing with his dog, Snickers. Additionally, he was an avid watcher of the news and really enjoyed studying history. Jeffery was very industrious. In an effort to do his part to protect and preserve the freedom of our nation, he served in the Army National Guard for two years. Over the years, he worked for the Saint Louis Human Development Corporation as a Youth Case Manager and for Saint Louis Republic Services. At the time of his passing, he was employed by U.S. Venture. After a brief illness, Jeffery passed into eternity at Barnes-Jewish Hospital on Friday, June 10, 2022. He is survived by: his wife ~ Ericka; his daughters ~ Eryn Trenae, Eryonne Leigh and Jaylee Evonne; his father ~ Freddie Lee (Dorothy) Jefferson; his siblings ~ Michelle McCoy, Carla (Dale) Jefferson, Freddie Lee Jefferson, Desiree Jefferson, Jason Jefferson, Montina Mullen and Cartaiga (Arnold) Collins; his father-in-law ~ Wilart Banks, Sr.; sisters-in-law ~ Willetta (Darryl) Graham and Bria (John) Christmas; brother-in-law ~ Wilart (Lisa) Banks; and a host of nieces, nephews, relative and friends. He was preceded in death by his mother, Glenda Jefferson and his mother-in-law, Vernisher Banks.

Jeffery Leemannzes Jefferson was born on Sunday, May 30, 1971 at the historic Home G. Phillips Hospital in Saint Louis, Missouri to the Freddie Lee and Glenda Ellison. As a child, he was taken to Fort Rucker, Alabama, where he attended Wallace... View Obituary & Service Information

The family of Jeffery Leemannzes Jefferson created this Life Tributes page to make it easy to share your memories.

Send flowers to the Jefferson family.