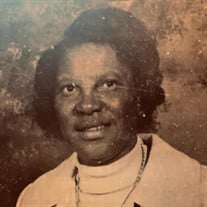 Jewel Mae Compton Franklin was born on April 18, 1921 in England, Arkansas to the union of Rosie Lee Brown and Josiah (Joe) Compton. She was the second oldest of four children born to Rosie and Josiah. Jewel Mae was preceded in death by her parents and her two brothers, Nelson and James; and one sister, Ruthie Lee. After the death of Rosie Lee; Josiah (Joe) married Leona Sanford. To this union Jewel Mae’s five other siblings were born. Armeka, Birdie Mae, Inez, Joe Jr. and David all preceded her in death. Jewel Mae was united in marriage to Robert Lincoln Franklin in December 1938. To this union seven children were born: R. L. (deceased at birth), Dollie, Robert Jr., Dorothy, Barbara, Teretha, Sundria and Brenda. Her husband, Robert (Jab) Franklin, her son, Robert, Jr., and her daughters, Teretha and Sundria and grandson, Reginald Lamont, all preceded her in death. She received her education in the Lambertsville, Arkansas school system. She also obtained her GED through correspondence courses while raising her seven children and two grandchildren (Lana and LaMont). Jewel Mae was an avid Christian Worker once she accepted Christ and was baptized. She began her Christian service at St. Mark Baptist Church and later Sunrise Missionary Baptist Church. She became a Mother of the Church and taught Sunday School at both St. Mark and Sunrise Churches. They moved to Lilbourn, Missouri in 1960 where she and Robert took the family to Howardville Baptist Church. Upon the Franklin's arrival in Missouri, they moved into North Lilbourn community. Miss Jewel, or Mrs. Franklin as she became known, started to do what she could to settle her family in. Shortly after, the children started to attend Lilbourn Elementary and Lilbourn East High at Howardville, Missouri. She worked tireless to get Student Aid, Defense Loans, and College Scholarships to assure their children had an opportunity to get beyond High School. She taught her children Godly principles and as much as possible and made sure they followed them. Good seeds were planted and she watered and nurtured through care and much prayer. After years of hard work in Arkansas and rural Missouri, she was blessed with a job as Head Cook for North Lilbourn Head Start for several years. She retired from University of Missouri as a Nutritionist Assistant. After retirement she spent many years assisting other elderly neighbors and church friends. Upon Robert’s and Jewel’s moving to St. Louis in the year 2000; they joined Prince of Peace Church under the leadership of Pastor W. E. Kilpatrick. She was a “life member” of the Missions Ministry. Jewel attended faithfully until her health failed. Jewel leaves to cherish her memory: four (4) daughters ~ Dollie, Dorothy, Barbara (Roosevelt) and Brenda (Edwin); thirteen (13) grandchildren ~ Chuck, Tia, Lana, Robert, Artondria, Chantal, Saunjina, Compton LaMont, Chrystal, Terrance, Raishonda, Kendra and Miles; twenty-six (26) great grands; and twenty-two (22) great-great grands.

Jewel Mae Compton Franklin was born on April 18, 1921 in England, Arkansas to the union of Rosie Lee Brown and Josiah (Joe) Compton. She was the second oldest of four children born to Rosie and Josiah. Jewel Mae was preceded in death by her... View Obituary & Service Information

The family of Jewel Mae Franklin created this Life Tributes page to make it easy to share your memories.

Send flowers to the Franklin family.