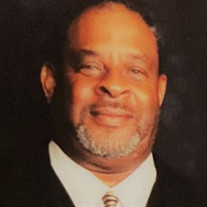 John Reed was born on November 1, 1947, second of seven children, in Belzoni, Mississippi to Ida Mae Jones Gibson. He is preceded in death by his mother, stepfather Freedman Watson, grandparents, William Henry, Sr. and Ms. Pernella Jones, brothers, Chester Bryant, Henry Watson, sister, Peggy Lampkin, and a special cousin, Hilda Blanks. John, was baptized by Reverend Ron Tucker, Pastor of Grace Church, he was truly a believer in God and had faith in God’s word that He would do what He said He will do. John was raised by his grandfather and grandmother, William Henry, Sr., and Ms. Pernella Jones. They came to Mississippi when John was past his second birthday. Not having any children of their own, pleaded with John’s Mom and Grandmother to let him come live in St. Louis, raising him as their own. After much consternation, they agreed to let John stay with them. John always kept a close connection with his family in Mississippi. John attended St. Louis Public Schools. He graduated in 1967 from McKinley High School. He attended trade school for plumbing. Following graduation, he finished his apprenticeship to become a Plumber and later a Journeyman. John retired from Kastner Plumbing in 2006. John married Phyllis Moorehead (divorced). To this union were two children, Melody and John Maurice. John later met and married his loving wife, Linda Marion. They were married September 15, 1999. John was an “AVID” bowler. He achieved high awards in bowling (3) 300 games. He bowled in many leagues in the St. Louis area until Covid forced the closure of the bowling lanes. His health prevented him from returning to bowling. He was very enthusiastic about his family. He was instrumental in organizing the JonesWarren-Baldwin family reunions. John instilled family values. Hard working, perseverance, and unconditional love. He loved to travel in-state, out-state and around the world. He loved sports. He always had spirited and humorous discussions and debates with his friends and family about football and basketball. He coached his son’s little league basketball and football. He was a very caring, loving, kind and giving man. Everybody loved him. He leaves to cherish his memories: his wife ~ Linda Reed; daughters ~ Melody ReedFoggie and Tanya Clardy (Chris); sons ~ John Maurice Reed (Patricia) and Charles Redden (Demetra); mother-in-law ~ Thelma Johnson; ten grandchildren ~ James, Kellie, Donavan, Cameron, Jordan, Devin, Bailey, Jaxon, Charissa and Jazmine; brothers ~ Willie (Marva) Gibson, Henry Watson (deceased), and Chester Bryant (deceased); sisters ~ Peggy Lampkin (deceased), Elouise Gibson-Taylor (Melvin Special Friend) and Liza Wynn (Frank); brothers-in-law ~ Raymond Dumas (Gail) and Harold Dumas (Gwen); sisters-in-law ~ Gwen Edwards, Pamala Perryman, Janis Dumas and Sarah McKeever (Anthony); special friends ~ Joseph Bridges and Nathan McCloud. As well as a host of loving nephews, nieces, cousins, and friends.

The family of John Reed created this Life Tributes page to make it easy to share your memories.

Send flowers to the Reed family.