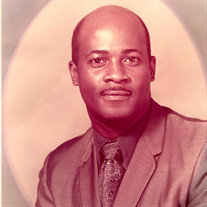 Johnny J. Hawkins Jr. was born October 21, 1931, in Birmingham, Alabama, to John J. Hawkins Sr. and Christine Evans Hawkins. He was the third of nine children. Just before Johnny entered junior high school, the Hawkins family moved to Decatur, Illinois, where he met his future wife, Laura Smith. Upon graduating from Decatur High School in 1950, Johnny immediately went to work for the federal government as a clerk-typist at the Decatur Signal Depot. After two years, he was drafted into the Marines, where he served two years during the Korean War. After the armistice, he returned to work at the Signal Depot and married Laura. The couple has one daughter, Diane. Beginning in 1961, Johnny had a series of promotions and transfers to other government agencies in Columbus, Ohio; suburban Detroit, Michigan; and finally, in St. Louis, where he retired in 1993 as a systems analyst. He received many commendations and certificates during his 43 years of federal government service. Johnny loved jazz. While in school, he got a part-time job at a local hotel and made enough money to buy a tenor saxophone and music lessons. For a time, he led a jazz band called Johnny Hawkins and his Co-Hawks, which played small venues around central Illinois. Johnny also loved sports. He earned many trophies in softball, bowling, golf, and basketball, which was his favorite sport. Even after he developed neuropathy and was unable to play, he avidly followed professional and college basketball, baseball, and football on television. If you called him on the phone and asked him what he was doing, he would almost always say, “Watching the ball game.” Johnny passed away Wednesday, February 21, 2018. Surviving him are: his wife and daughter; grandson ~ Devin Cox; son-in-law ~ Doug Cox; sister ~ Vertis Hawkins Jones and her husband, John Jones; sister ~ Janice Hawkins Warren and her husband, Joseph Warren; brother ~ Claude Hawkins and his wife, Celia; brother ~ Erskine Hawkins and his wife, Shelly; sister ~ Christina Hawkins Stringfellow and her husband, Allen Stringfellow; sister ~ the Rev. Cynthia Hawkins Thomas; and a host of nieces, nephews, and other family. He was preceded in death by his parents; a sister, Johnnie Mae Hawkins Brown; and a brother, Thaddeus Jerome Coleman Hawkins.

The family of Johnny J. Hawkins created this Life Tributes page to make it easy to share your memories.

Send flowers to the Hawkins family.