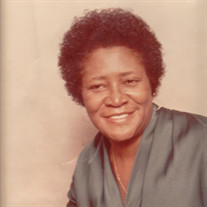 Mother Josia M. Williams was born November 17, 1923 in Glendora, Mississippi to loving parents Joseph and Mary Campbell (Sims). She departed this life on Sunday, December 3, 2017 at 11:17 a.m. surrounded by her family at Alton Memorial Hospital. She was blessed with ninety-four years and sixteen days. She accepted Christ at an early age. She became a member of Morning Star Baptist Church upon moving to Alton, Illinois. She was preceded in death by her husband, Walter Williams, her parents, Joseph and Mary Campbell, her step-father, Cleophus Sims, sister, Lucia M. Williams, brother, Robert Campbell, and a special friend, Mamie Jefferson, niece, Beatrice McGee, nephews, John Sanders and George Sanders, and aunt, Mattie Wallace. She was raised and received her education in Glendora, Mississippi. In 1949 she moved to Memphis, Tennessee where she married her soulmate, Walter. Later in 1951 they moved to Chicago, Illinois and had a wonderful life. She received her certificates in foods and became a proprietor of her own confectionary and grill until she retired and moved to Alton, Illinois to be closer to her family. When she became a foster grandparent for the last twenty-one years. She leaves to cherish her memory: Alice, Martha, Joseph, Delores, Ophelia, Mary, Ernestine and Luke, all of Alton; great nieces and nephews; great-great nieces and nephews; and great-great-great nieces and nephews; Goddaughters from Chicago; and a grandson in Alton; including a host of cousins and friends.

The family of Josia Williams created this Life Tributes page to make it easy to share your memories.