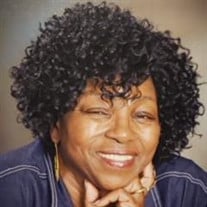 Joyce Marie Henry Kirkwood was born on May 7, 1942 in Bell City, Missouri. She was the fourth child born to Mack C. and Tecora Lewis Henry. Her parents, along with six brothers, preceded her in death. Joyce started school at the tender age of six. She attended Old South Master, Truman Elementary and graduated from Bell City High School in 1962. Joyce, after residing in Freeport, New York for a year, returned home and was united in marriage to Robert Kirkwood, Jr. They lived in Sikeston and Vanduser, Missouri, where they began a family. Soon after, they decided to make St. Louis their permanent home. To this union of fifty-five years, they raised four children: Teresa Ann, Robert III, Shawn Courtney and Raymond Lamont, who preceded her in death. Joyce confessed a hope in Christ and was baptized in 1959 under the leadership of the late Reverend C.H. Thames, who was the Pastor of Pilgrim Rest #2 Missionary Baptist Church in Bell City, Missouri. Joyce was faithful to the church and always put God, first. Being raised in a “God-fearing Home”, Joyce learned many important “Christian principles”, that guided her throughout her life span. Upon moving to St. Louis, Missouri, Joyce united with New Emmanuel in 1969 under the leadership of the late Pastor C.H. Thames. Over the years, she also served under the late Jeremiah Macon, Pastor Robert Barney and currently Pastor Antoian T. Johnson. She was a very faithful member until her health began to fail. She attended and taught Sunday school for many years. She served as the Church Secretary for over 25 years. She also sang in the Choir. Joyce truly loved the Lord and is resting with Him now. She always stated, “Absent from the body, is to be present with the Lord.” Joyce loved to travel. She believed in exposure. She often said “you need to see some things with your own eyes”. Robert and she would pack up their children and drive many places. They loved to travel. Joyce leaves a rich legacy and will be missed by many. On November 8, 2018, God dispatched His Angel to bring Joyce home. She leaves to cherish her memories: her devoted and loving husband ~ Robert Kirkwood, Jr.; one daughter ~ Teresa Ann Pearson (Reginald) of Alton, Illinois; two sons ~ Robert III (Nicole) of Atlanta, Georgia and Shawn Courtney (Yolanda) of Kansas City, Missouri; four grandchildren ~ MarKell, Harlym, Harper and Hariah Kirkwood; eight step-grandchildren ~ Kevin and Koty Jones, Latereka Pearson-White, Andria Randol, Helois Foster, Nikki Pearson, Cameo Foster and Shaliece Pearson; six siblings ~ Barbara Stephenson (Carl), Shirley Williams of St. Louis, Ethel Powell (Charles), Odell (Marilyn) of Jefferson City, Missouri, Carolyn Carter (Donnie) of Houston, Texas and Everlyn Rader (Howard) of Springfield, Missouri; five brothers-in-law ~ ML (Betty) Kirkwood, Miles (Maggie) Kirkwood, Arthur Kirkwood, Richard Willis of St. Louis and Jerry (Janet) Kirkwood of Dallas Fort Worth, Texas; three sisters-in-law ~ Edna Kilgore and Liz (Carl) King of St. Louis, Missouri and Maggie Lee Robinson (Leroy) of Springfield, Missouri; and a host of nieces, nephews and other relatives and many friends that she loved and cherished.

Joyce Marie Henry Kirkwood was born on May 7, 1942 in Bell City, Missouri. She was the fourth child born to Mack C. and Tecora Lewis Henry. Her parents, along with six brothers, preceded her in death. Joyce started school at the tender age of... View Obituary & Service Information

The family of Joyce Marie Kirkwood created this Life Tributes page to make it easy to share your memories.

Send flowers to the Kirkwood family.