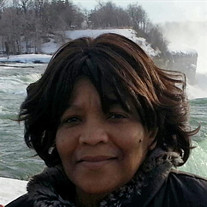 Once upon a time not long ago in St. Louis, MO a beautiful baby girl named Karen Denise Blount was born to the union of Edward O’neal Blount and Carol Hagens-Blount, on March 16, 1956. This Beautiful baby girl was one of uniqueness with much talent born into a family of love. Karen was Artistic and talented in many ways, she was challenged often by eleven siblings 6 brothers; Earl, Edward, Louis, William, Ricky, and Daryl. 5 sisters Janice, Diana, Joyce, Barbara & Alana. Although her brother Ricky Johnson and father Edward O’neal Blount preceded her in death they would often look out for her. From Ricky roaming the cafeteria of Vashon High School, eating everyone’s lunch while keeping an eye on his sister until her graduation in 1974. To Edward O’neil Blount supplying her every need as she attended college at St. Louis University, where she would major in Medicine and later go on to change her major to Business Management. In 1977 she would give birth to her first child Auricia Blount (Aaron), by 1979 Christopher Blount (Robin) and in 1985 Jacintha Blount (Alfred). Her 3 children would go on to have 11 children of their own; Trevia, Ariah, Alexandria, Kayleah, Bryon, Brianna, Kristin, Chloe, Natalie, Isabelle and Allison. Karen retired from the post office and was a graduate of both Washington University and Webster University. She was a member of Sigma Gamma Rho sorority incorporated. As a member of Sts. Teresa and Bridget Catholic Church she often volunteered her time as a Lecturer, Eucharistic Minister, Youth Counselor, and member of Ladies Auxiliary Guild. You could often find her working at local food pantries, The Gateway Classic, First Night St. Louis, clothing and toy drives. On July 4th Karen Denise Blount was called home to start her New Beginning and today we honor her.

Once upon a time not long ago in St. Louis, MO a beautiful baby girl named Karen Denise Blount was born to the union of Edward O&#8217;neal Blount and Carol Hagens-Blount, on March 16, 1956. This Beautiful baby girl was one of uniqueness with... View Obituary & Service Information

The family of Karen Blount created this Life Tributes page to make it easy to share your memories.

Once upon a time not long ago in St. Louis, MO a beautiful baby...

Send flowers to the Blount family.